Day 2 - I woke up early around 7am due to the uncomfortable ground. So i packed my tent and continued my trip to lake morena.

My campground was  already booked and after a friendly check-in I drove directly to the lake. 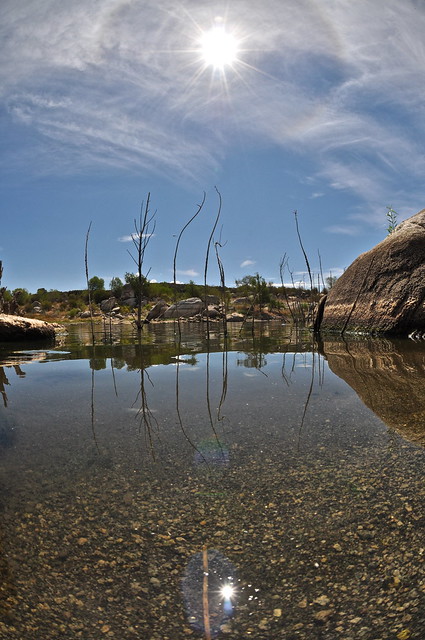 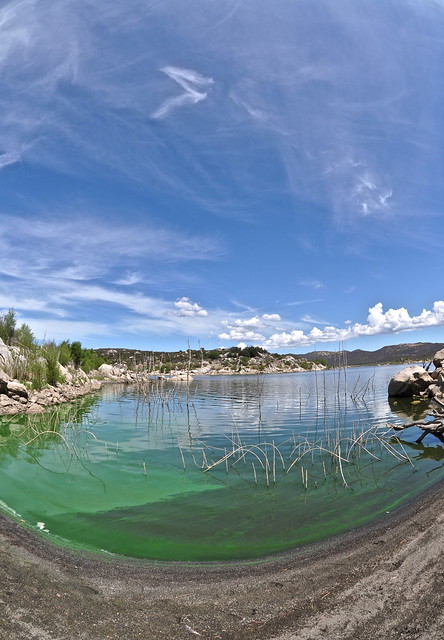 I caught quick two small ones on finesse worms. 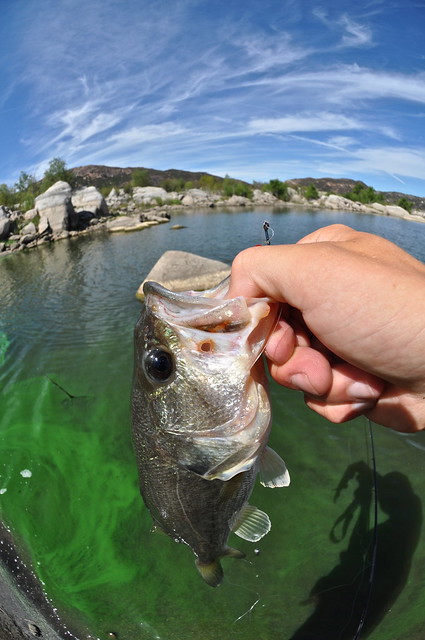 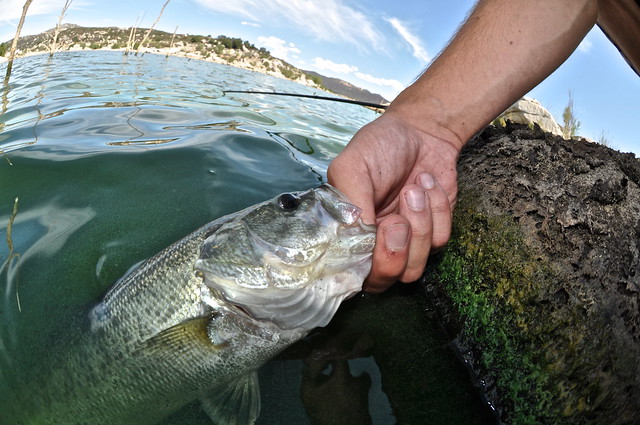 "this lake has potential!" i told myself, returned to the camping, built up my tent and went back to the lake. I decided to fish the rest of the afternoon on my float tube to discover the lake a little bit. In the first hour I brought in again some small ones. 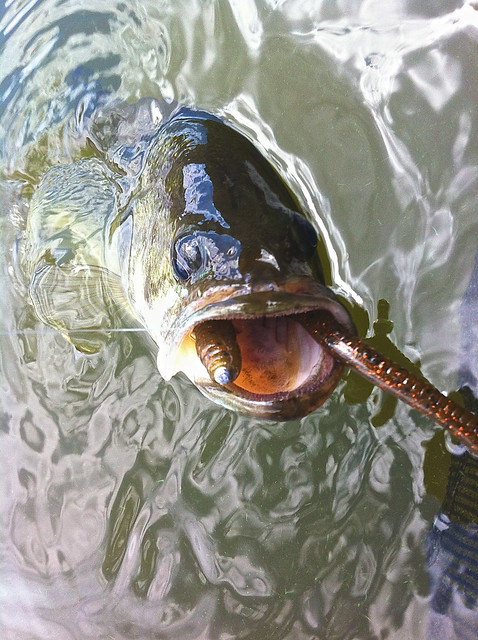 The sky got darker and i heard thunder and flashs coming closer and closer, I didn't want to return yet so I decided to search protection under some rocks. 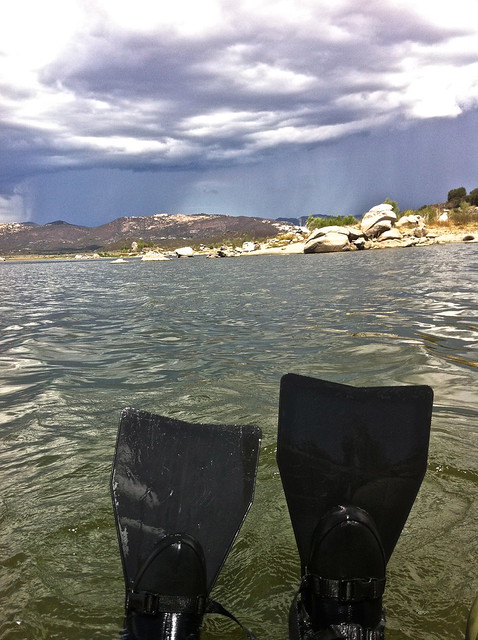 I ave to add that the wheater here actually is really hot, looked like too hot for the forest. 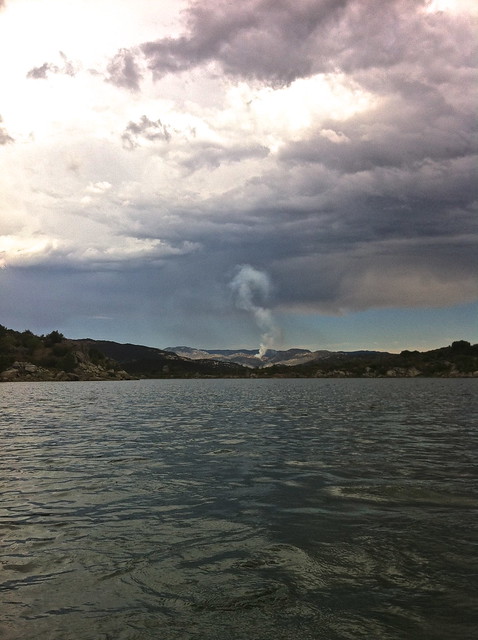 Directly after I brought all equipment in safety, heavy rain started, the thunderstorm arrived! 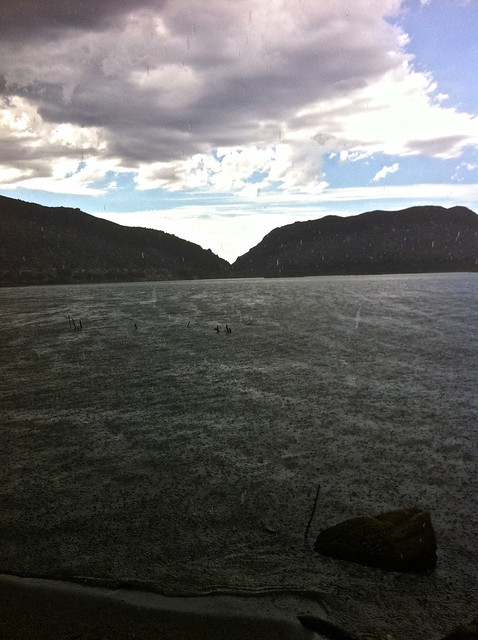 After half an hour waiting under my half dry hideout, the rain settled down a little bit and I continued fishing in hope the fish got woken up.

I decided to fish bigger and give a chance to the Savagear 3d Trout 5'' and BAMM! after a few casts I got a bite and finally a better fish. 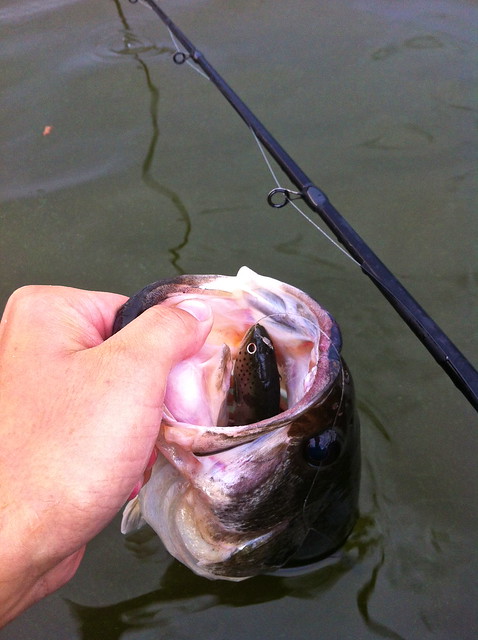 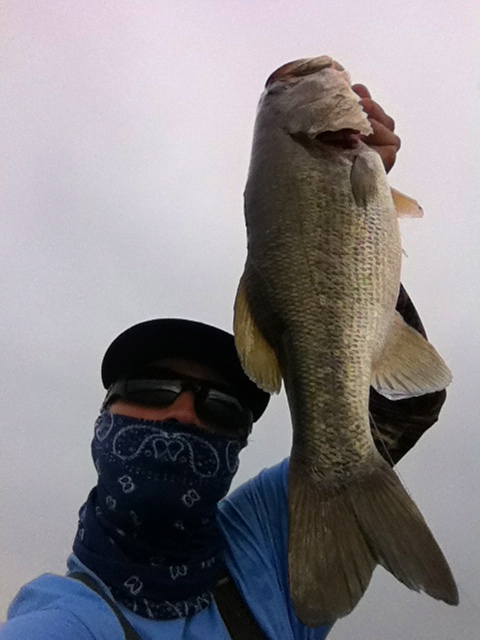 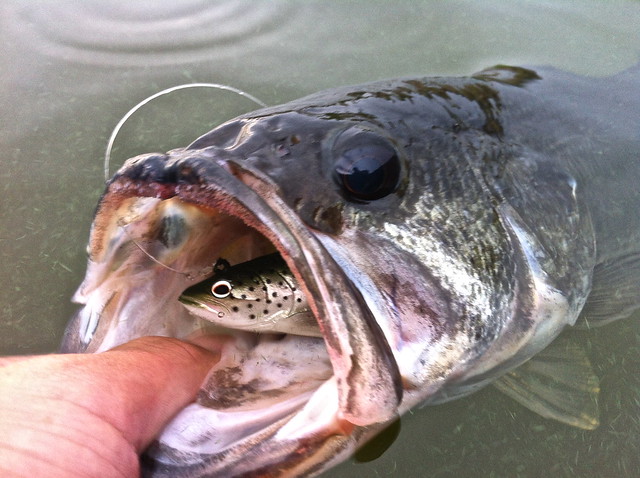 By the way my first bass on swimbait so far and many more to follow, I hope!

The last hours I spent throwing a Huddleston 68 (lost my 3D Trout a few casts later on a tree) and some topwater, without any more succes. 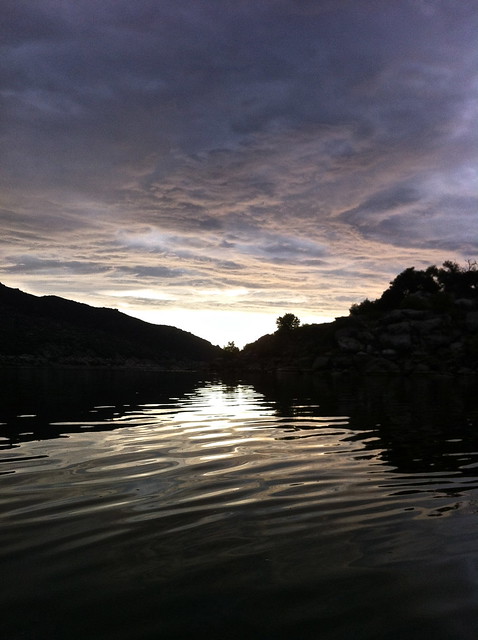 The fishing ended peacefully with another sunset spectacle. 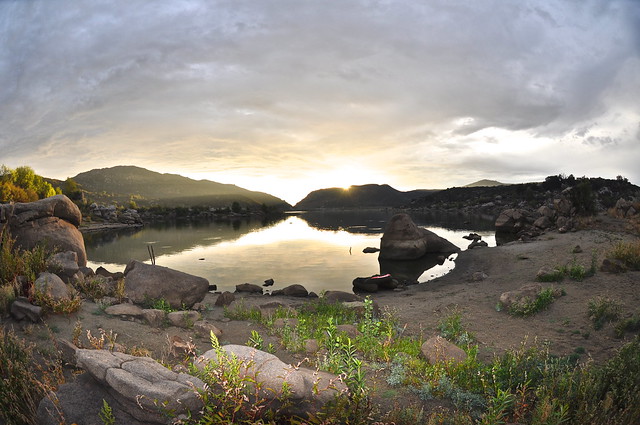 Back to the tent the next problem, the storm blow away my tent and the things inside got wet.

But relax, it wasn't that bad as the first impression and after 15 minutes everything was ok again. Even the shower was for free this time.

Unfortunately it started raining again in the night so I slept in the car, what is really uncomfortable in a small car like mine.

Day 3 - My day started at 6:30am with the lake opening. Arrived at the lake I just hoped out the car and throw my Tiemco Riding Pepper and caught again two small Bass! 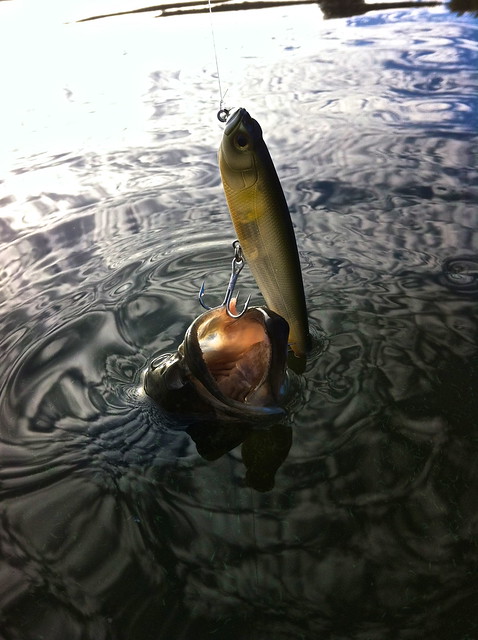 After this fast action I realized how beautiful this morning was, short after I was on the lake. 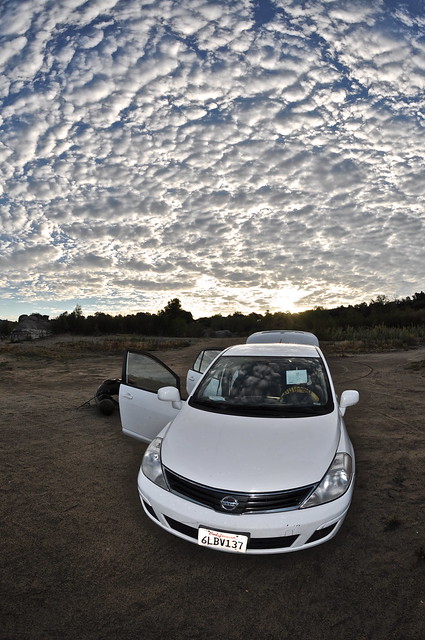 I worked myself to the first spot I discovered the day before and threw a Roboworm 6'', a suggestion from a guy I met after the thunderstorm, into the woods. i was surrounded by jumping fishes, most of them carps but one moment I made out a bigger Bass in the air. On cast in his direction and after a few moves, something hit the worm and gave  a good fight. 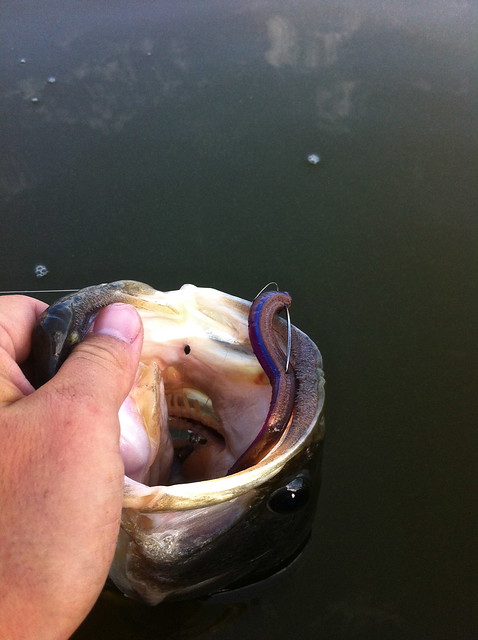 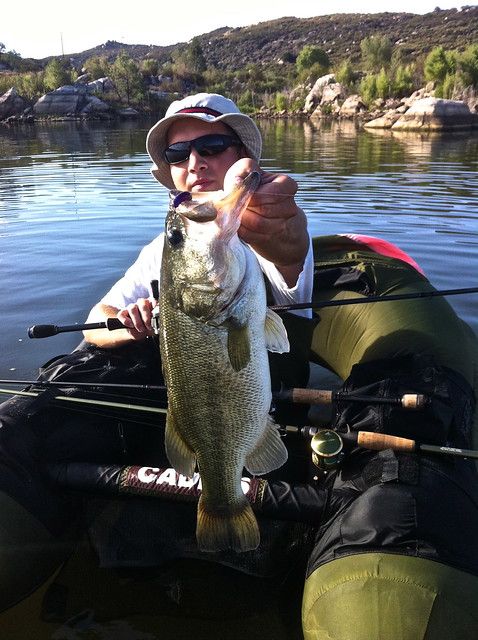 Thanks to a older guy on a boat which took me some pictures. I have to add here that I found out the first day that I forgot my GoPro and had just my iPhone camera during the tubing, damn!

After taking some pics and releasing my catch I moved back to the very same spot. Two casts later I got a strange bite and was not even sure if it is a  fish or not. I set the hook, something exploded on the other end and started immediately tearing line from my Daiwa Steez despite the completely closed brake. I felt how the fish swam to the surface and I was trying everything to hold him back. Not enough and as it jumped I saw for the first time how big this bass was. Trembling from excitemment I carefully brought the fish inch by inch to me till he was directly under me in the water.

I grabbed it with both hands and when I realized it's finally done I just could scream from joy! What a beast! 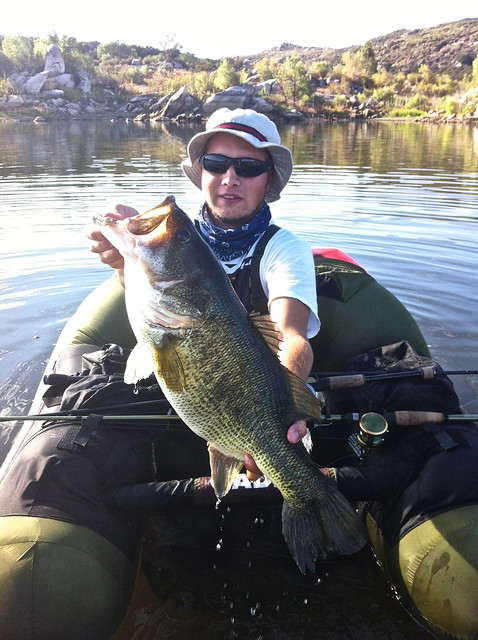 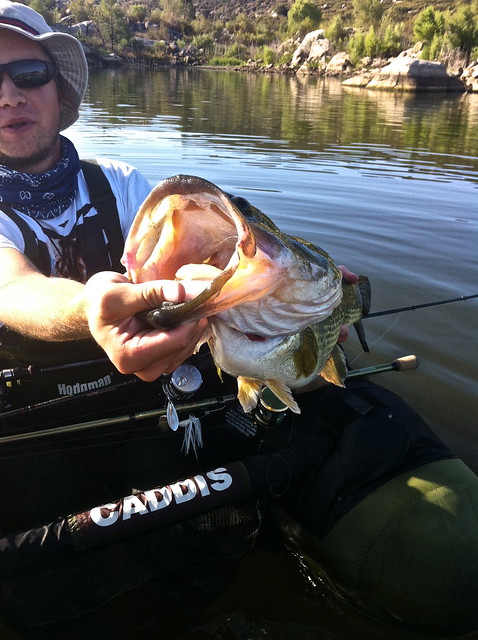 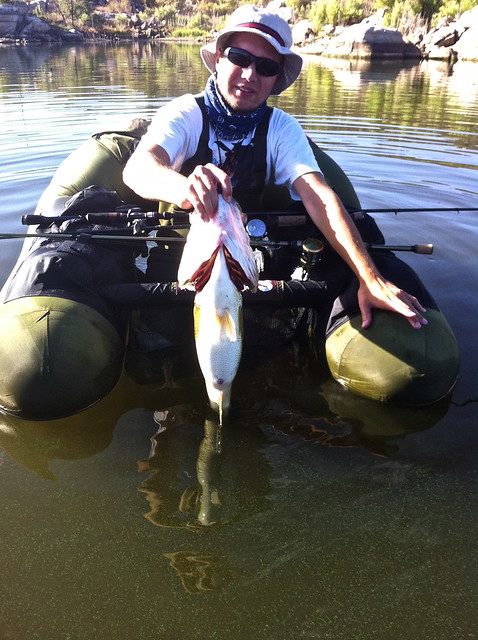 Fortunately my picture-buddy from before was still on his spot and took again some pictures for me. I couldn't imagine to take good pictures of this fish alone just with an iPhone. Thank you!

My biggest fish so far here in California and maybe my biggest ever. I don't have a scale since mine broke after weighting a small fish a few months ago. My photographer rated it as a 7-8lb fish what would beat my last PB from Lake Lugano in my country.

After this blast I returned again to the spot to bring the future mother back in her environment and make some more casts.

I couldn't believe but a short time after another fish bite in the middle of some branches and it was not that easy to pull it through the cover. 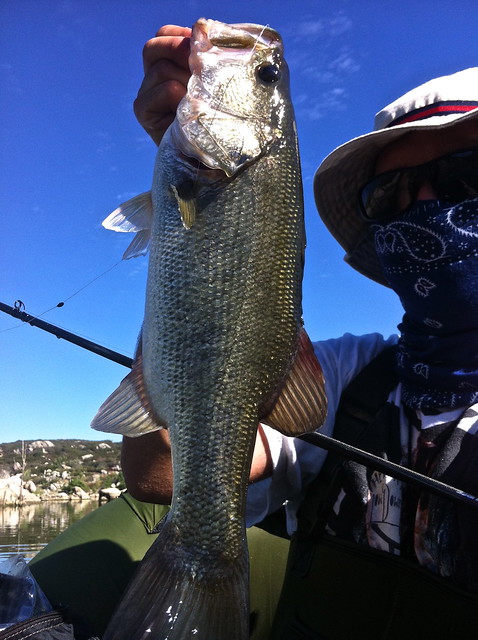 What a start in the day! These three fishes were all caught in maybe half an hour. Something I've never experienced before.

Because of heavy winds during noon and early afternoon I took a break from the burning sun.

Some time in the car later I went back on the water to fish new territory. A few spots later I got another pounder on a swim jig. 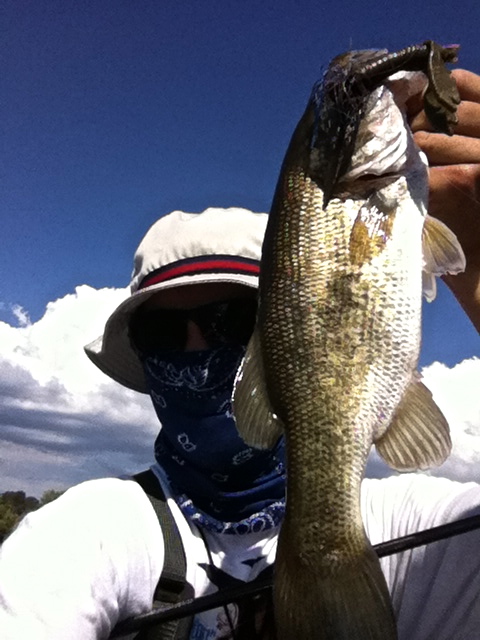 The evening didn't bring any big action as I was hoping but of course I was more than happy with my day. In total I got 7 Bass and missed several bites. 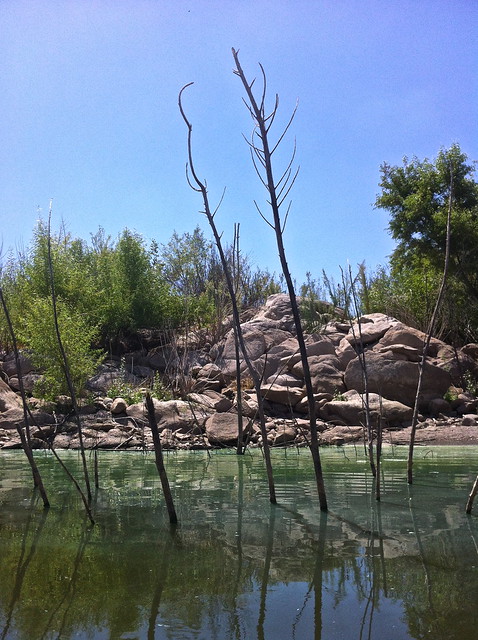 Thanks to the better weather my tent was still on its place when I returned. 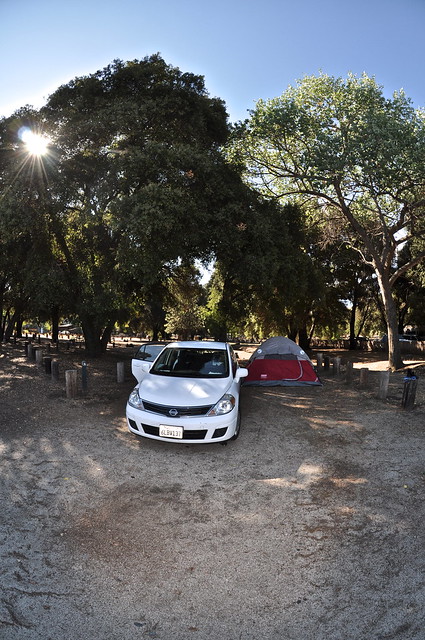 The night was really peaceful and even the ground was a little bit softer at Morena.

Day 4 - Wednesday was planned to move to Lake Jennings Camping and to fish Loveland Reservoir. But after the result I had Tuesday i really had to fish again Morena. So I fished again from the lake opening till noon when I had to check out from the camping. Just from the shore because the seat of my float tube tore on one side and didn't want to risk something. Topwater didn't bring my any bites so I changed back to my Worms. Good decision! 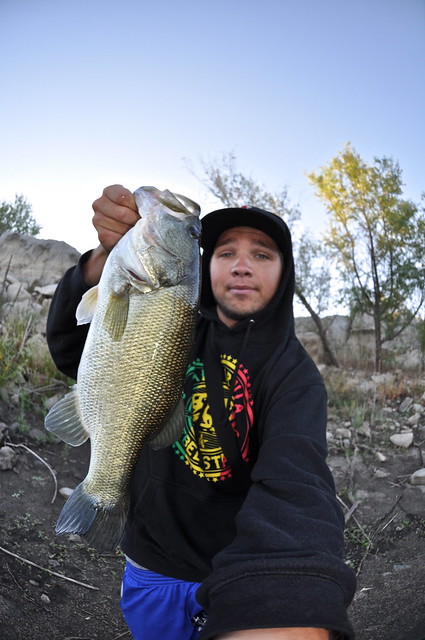 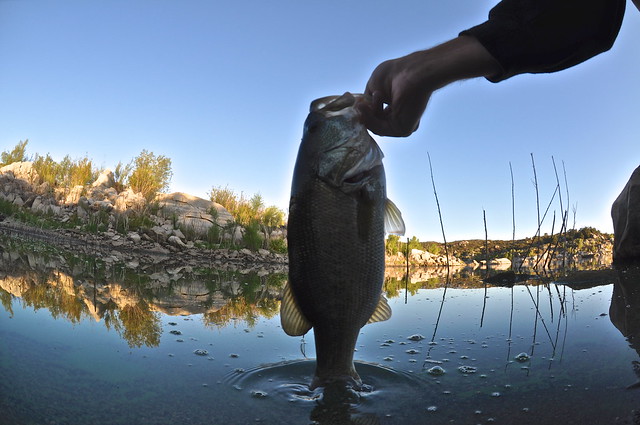 The only fish of the morning but again a better one!

While driving to Lake Jennings I survived a border patrol check-point and heavy rain on the freeway.

These days at Lake Morena were something of the best that happened to me here so far. The staff and rangers are very friendly and helpful and the camping is perfect located, just next to the lake. I will definitely go back there soon and spend some more time on this beauty of a lake!