After several reports from abroad here a few words about the recent adventures on the local lake here in Switzerland. The last few trips convinced me that the fishing here can be fun and very interesting too if you put some work in it! Since a few years now I've wanted to catch a big perch in our local lake. I never put too much effort in it  and so I hadn't caught a really big one yet. This season has been quiet different and it all started when my good friend Sam invited me on his boat a few weeks ago... The following paragraphs describe what went down so far - enjoy!

first attempt Sunday on the lake with Sam. It's still cold, definitely not my favourite weather. A few casts into the first spot, Sam's giving me tips on how the set the hook properly (not as hard as when bassfishing) then out of nowhere I feel a bite and set the hook like I've been told. Sam lands my first perch of the season, I haven't seen one that big  in person yet - that has to be my new PB!? It is - 38cm, I'm stoked! No fish during the rest of the day but I'm smiling anyway! 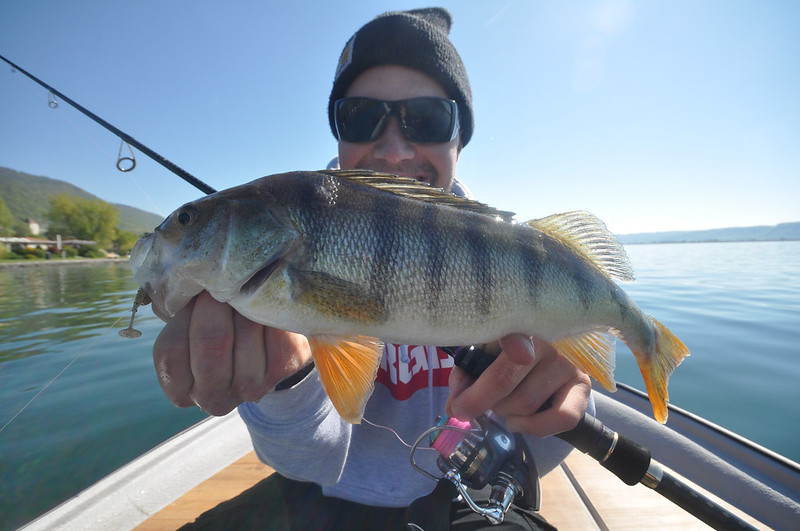 second trip Sam: can you take wednesday off? Me: Gotta ask, I already took vacation recently... Later me: let's go, I don't need that income anyway, gonna eat yogurt for the rest of the month.^^ I don't catch a damn fish that day. Sam doesn't catch much neither what kinda comforts me a bit haha.

third trip One week later I take another day off. I'm lucky that my actual job allows me so much free days as long as everything is done that needs to be done. Fishing is slow through the day. A few bumpers or was it just a overly motivated rock..? In the evening we pull up on a good looking spot and there is the bite I was waiting for! 40cm - new PB, just 10 days after pushing it to 38. 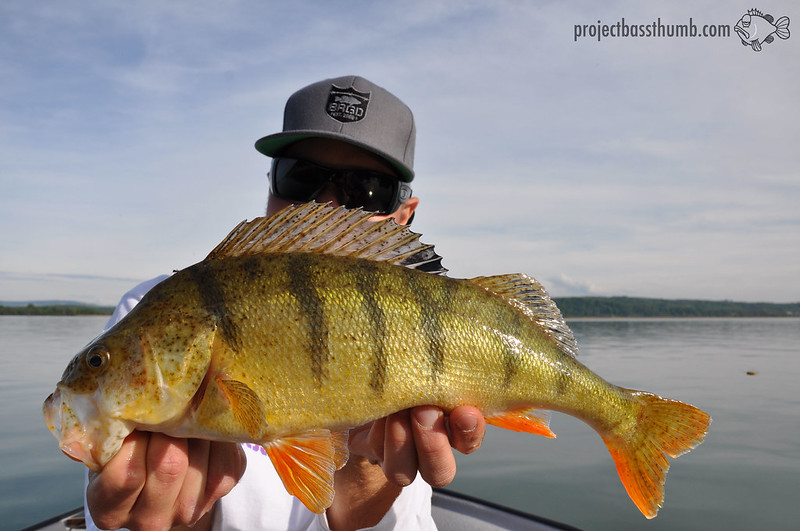 fourth trip Another Wednesday, another day on the water... We both catch some perch now and then but the big ones stay away... We give my new favourite spot another try and promptly we catch and lose some nicer ones. What happens then still amazes me, just one week later I break my PB again with a nice 42er perch! A few casts later, I believe to have hooked some grass but out of a sudden the "plant" starts to fight and Sam nets another beautiful perch of 42cm for me. Never thought I would catch two such big perch within half an hour. These trips are getting better and better! 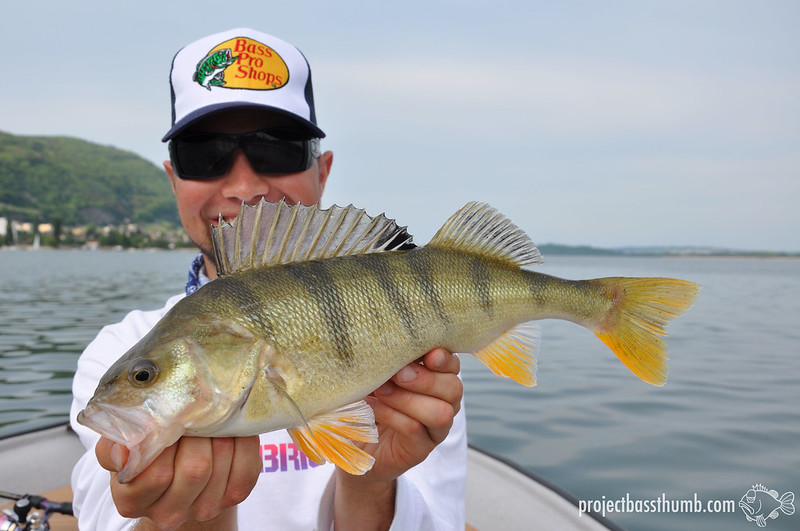 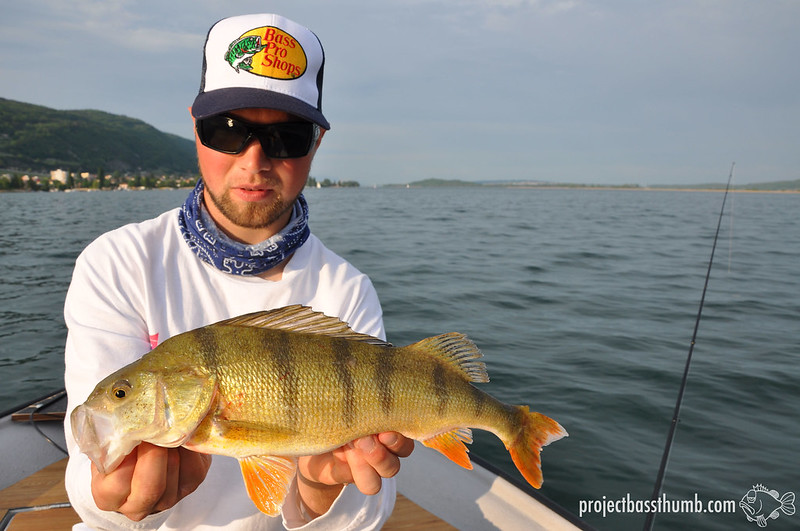 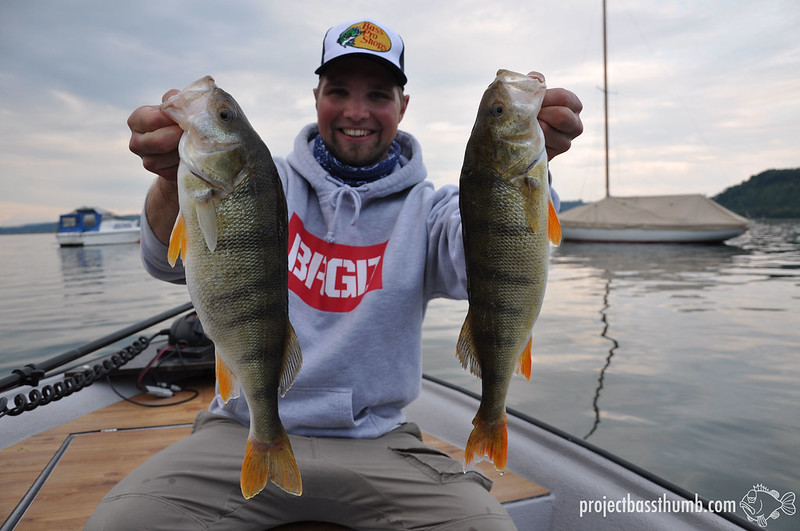 fifth trip Once again I convince my boss to let me do my Wednesday workload on Saturday. So Sam and I give it another. We improve on the numbers but don't get another +40 perch this time. Still a nice day on the water! 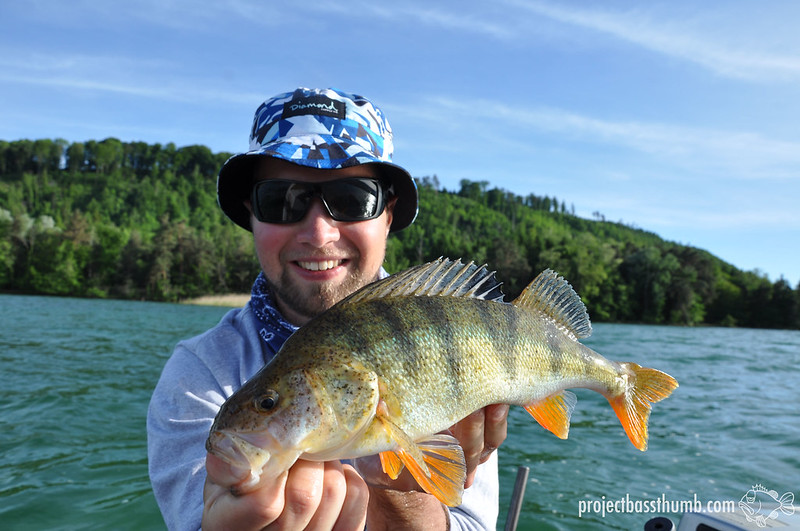 sixth trip Already one day later I had to get at the lake for a quick after work session. The latest trips definitely motivated me and I just ignore the heavy winds blowing straight into my face. I cast to this one particular spot again and again, I just feel like there are some fish around and Bam! - theory approved! With 25cm it's already a nice perch but not the size I was hoping for. I give it another shot and there's another one, this time it feels way heavier - big fish! After almost loosing it to the only freakin stick along this long strech, my buddy who joined me can finally net the fish. I'm not sure how I deserve this but once again I broke my PB - 43cm! Can't really believe it, what an evening! 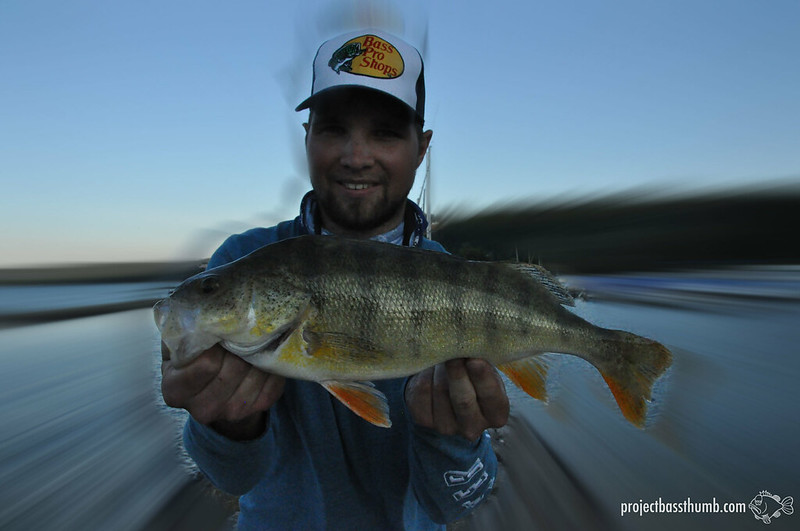 seventh trip Sunday, the sun is shining and the lake is full of bathtub-captains and weekend-anglers. In the afternoon dark clouds scare them off the lake and once again we put Sam's boat into good use. Both land a few good ones without getting over 35cm. right before the thunderstorm we head back home. 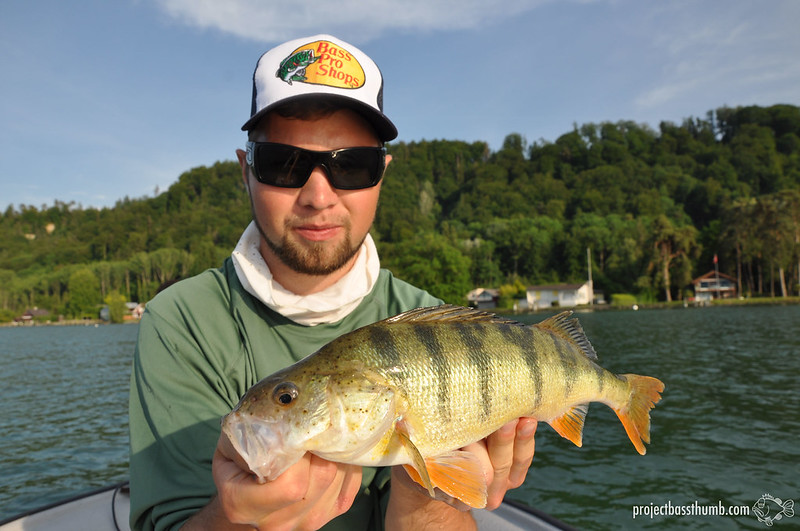 eighth trip It's already Wednesday again, another day fishing. At this point I really got into the local perch fishery. I'm looking forward to each upcoming trip with such euphoria which before I only knew from bass or peacock bass fishing days. It seems like we chose the perfect day. Already in the morning we both get several well sized perch. the highlight is definitely the double hook-up with a 39er for Sam and a 42er for me. The afternoon continues awesome with more nice fish and sunny weather. Shortly before heading back I even catch the second 40up of the day - my first 41er. Easily my best perch day ever and even Sam counts it to his Top5 which definitely means something! 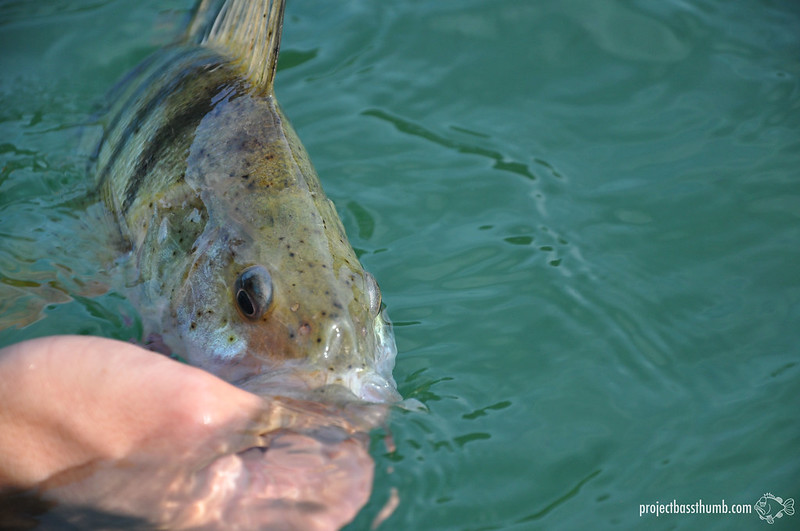 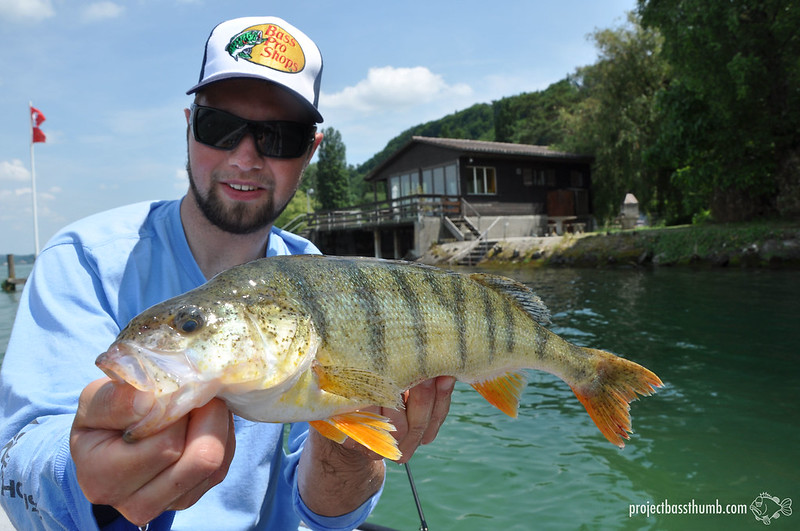 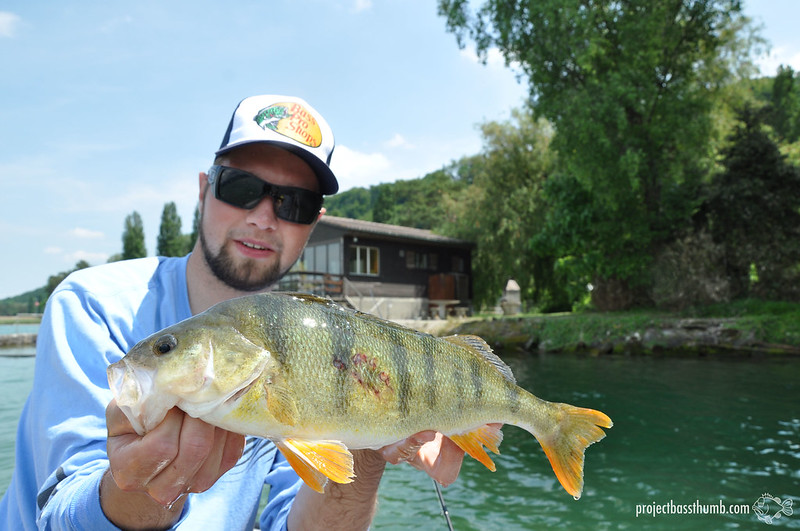 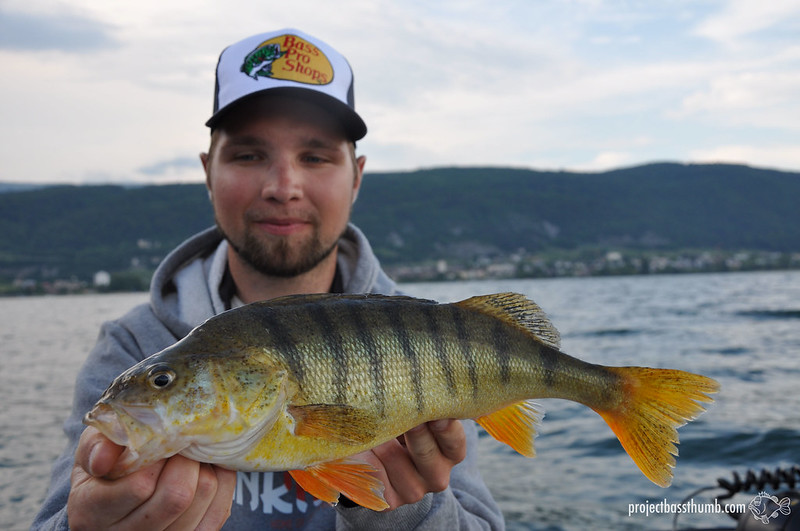 ninth trip After yesterday I just had to do another shore-after-work-session with buddy Daniel. First cast - fish on! ...but it shakes off the lure after a bad netting attempt. Two casts later - fish on, again and this time it lands in the net. 42cm - what's going on?! 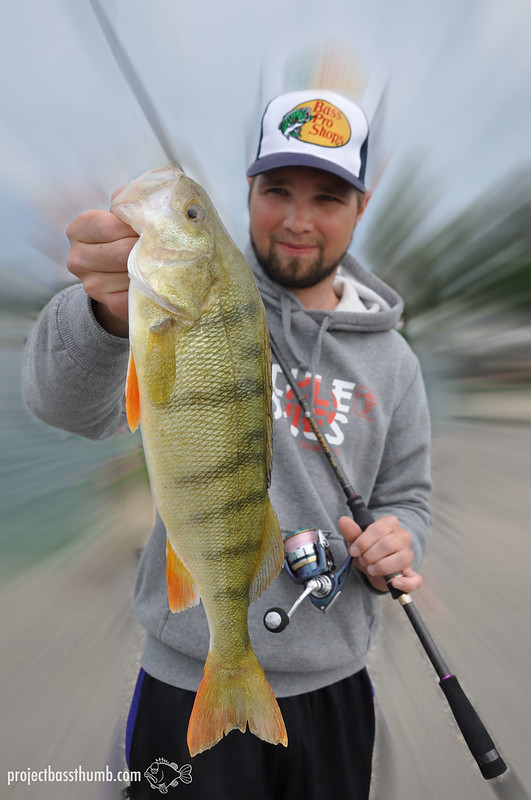 tenth trip Shore session on my own. First cast - Bam! there's the next one but while I dip my net into the water the 40up perch frees itself - what a bummer...

eleventh trip After loosing that pretty fish the day before I just have to give it another shot. this time with Jan who catches a nice 35up perch while I miss several good bites.

twelfth trip Monday but some sort of holiday, so Sam and I put his boat another time on the lake. the thunderstorm from the days before seem to scared the fish and just catch some small ones now and then. We plan to leave around 5pm, drive to one of our spots for the third time this day and finally we find them. Out of a sudden I hook one and instantly feel that it's a good fish. A few meters from the boat we observe how the giant fish shakes its head and out is the hook... DAMN! There goes my new PB which Sam estimated to be at least 45cm. The 38er I catch shortly afterwards is just a small consolation. We end up leaving around 8pm, three hours "late". 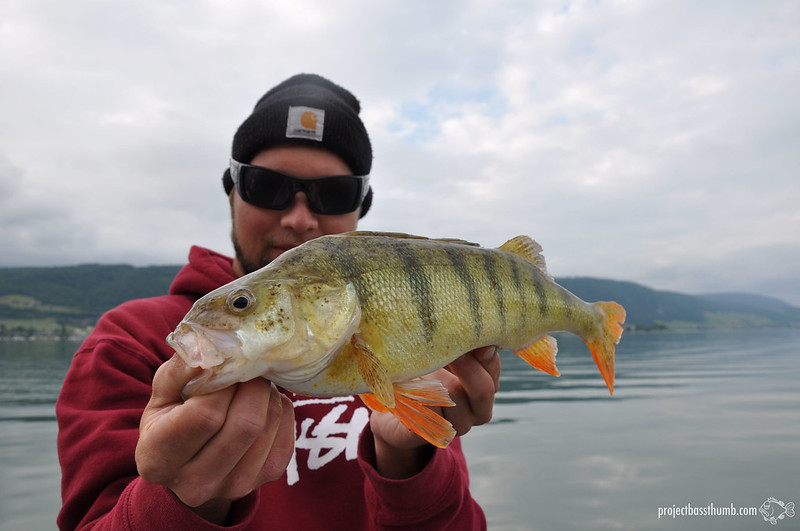 Two days later I flew to Spain so that was my perch season so far. I'm looking forward to everything that will follow these trips and hope to catch some more nice sized, local fish soon! Big thanks to Sam for these interesting times, I definitely learned a lot while having a great time. So looking forward to the next adventure!