Last year, when I returned from the Rio Vichada in Colombia, I was sure that I have to return to this river. When my school year didn't go as planned, it opened up possibilities for another fishing trip. Together with my fishingbuddy Daniel aka Housi we put together a promising adventure and so, for the rest of the year, I worked my ass off to finance those long awaited weeks. To make the long, uncomfortable flights from Europe to South America worth it, we decided to stay a bit longer than on the trips before. What we exactly did you will find out in the following lines... We started our trip with a week in Brazil on the famous barco hotel "Kalua". Long before our arrival in Manaus, Brazil, we knew the conditions probably won't be very good. Unstable water levels limited the choice of the rivers and reports of trips before ours didn't sound promising neither. Despite the bad outlook we visited two of the Sucuri Pesca stores shortly after finally arriving in Manaus. I planned on buying plenty of my favourite chopper-lure, the Highroller Riproller 7.5inch, since I used up the few I had last year in Colombia. But both stores didn't have any Highrollers in stock, the explanation of the sales staff was simple "we just sold so many...". Hmm, so how about ordering some more?! Compared to our last visit 2 years ago, both shops were scarcely stocked and most of the lures I wanted seemed sold out since longer. The staff didn't seem to care much and tried to sell me some cheap Chinese knock-offs instead... Fortunately we both already brought too many lures with us so the failed shopping tour didn't bother me too much and a short night later we were headed back to the airport to get to Barcelos. On the Kalua, the tackle was quickly prepared and I couldn't wait to make to first casts. We ended up on the Rio Demini, the only river around with dropping water levels but an unexpected ton of mosquitos. 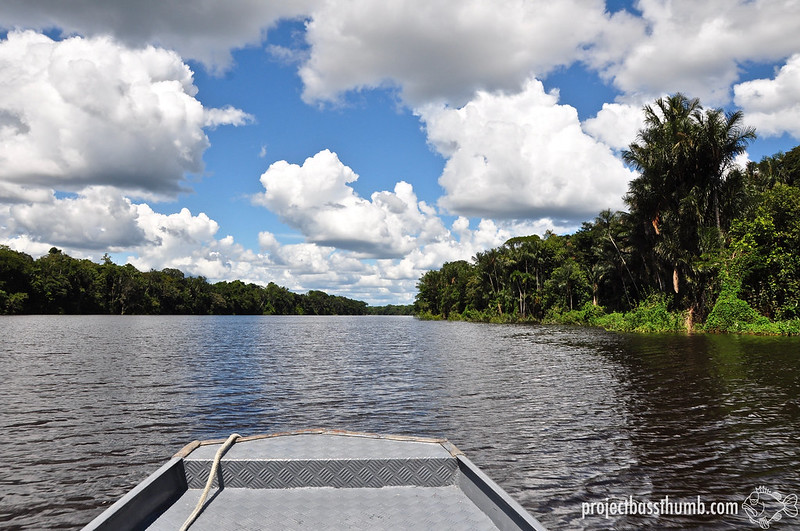 Finally on the water, we had not just to find the fish but also the few available spots. Other operators chose the same river and so around 20 fishing boats ended up casting around in the same area, most of them without much success. At the end of day one, Daniel and I had each one small Peacock Bass around 4lb to tell about which wasn't even a bad result compared to the other 14 anglers on the Kalua. Full of motivation we started the second day which is quickly told, zero! Not one single Tucunare wanted to bite if there were even fish around, we weren't so sure. There was no action on the surface and the temperatures of water and air were surprisingly cool. 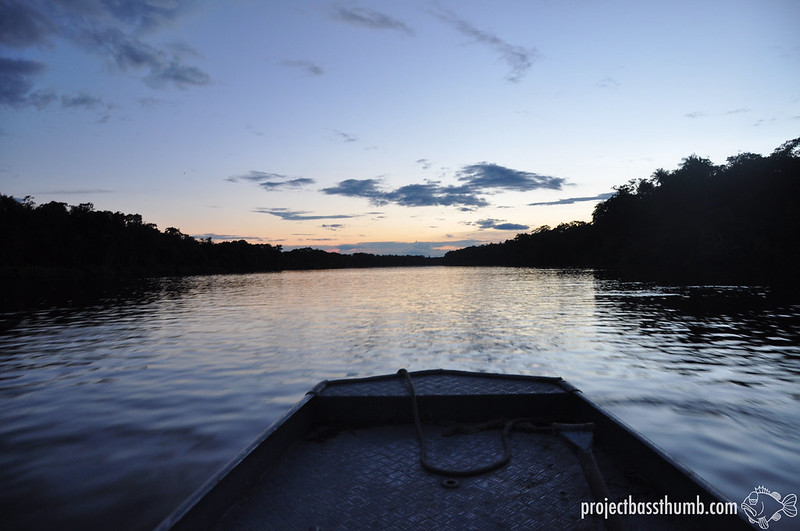 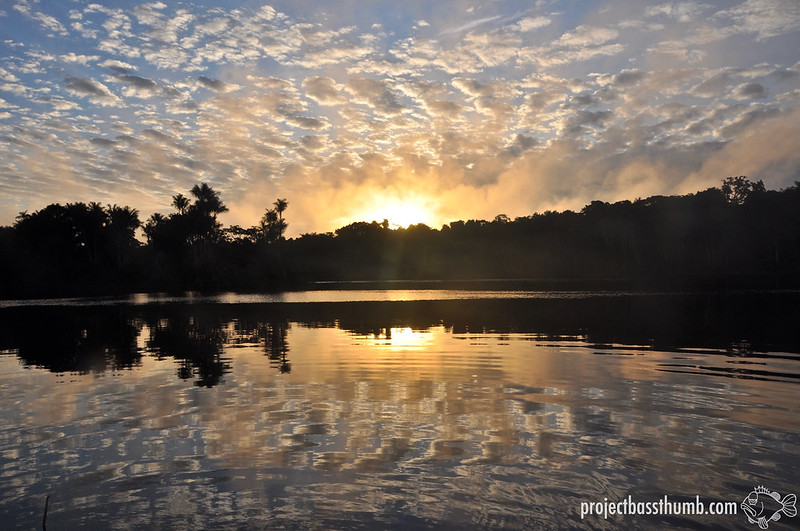 Our guide for the week, Carlinho, put in a lot of effort to bring us to some fish. So one morning we spent around two hours cutting our way through heavy reeds until we landed in a promising lagoon. 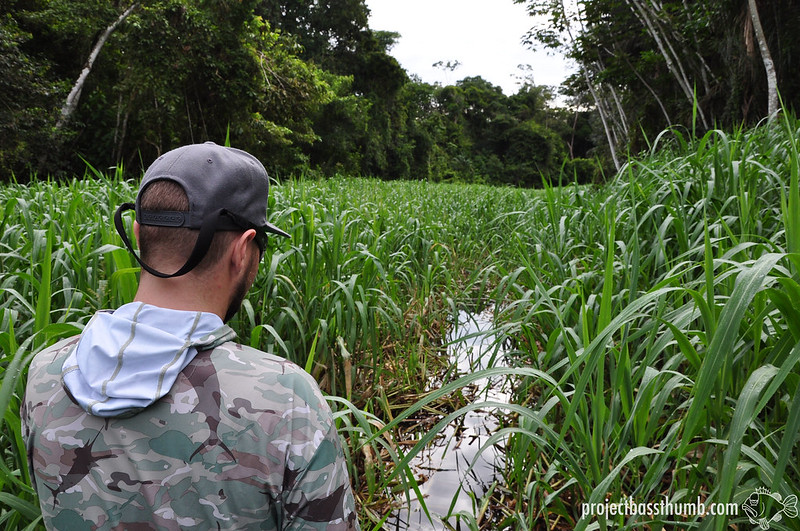 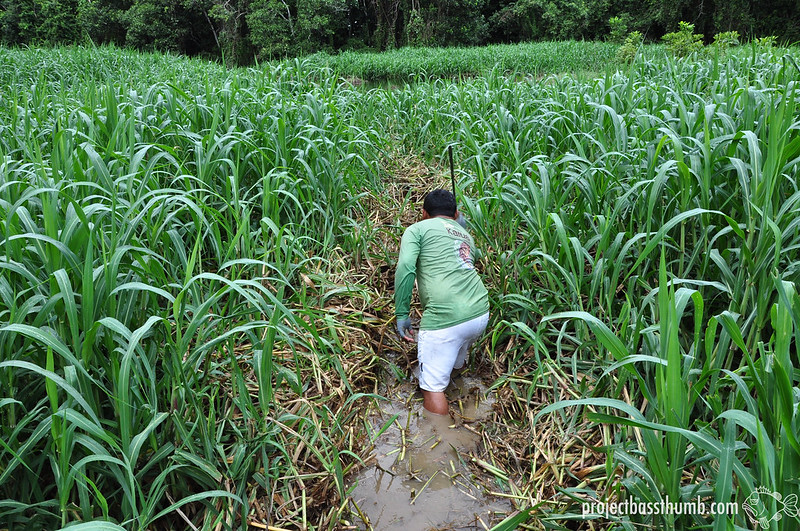 After figuring out the working patterns, we caught around 40 Peacocks. Not the big ones we were looking for but still fun after catching almost nothing the days before. With a nice 8lb Acu, Daniel got the biggest fish of the day. At the end of the week his catch was announced as biggest fish of the trip out of 16 anglers. Yes, fishing was that bad! 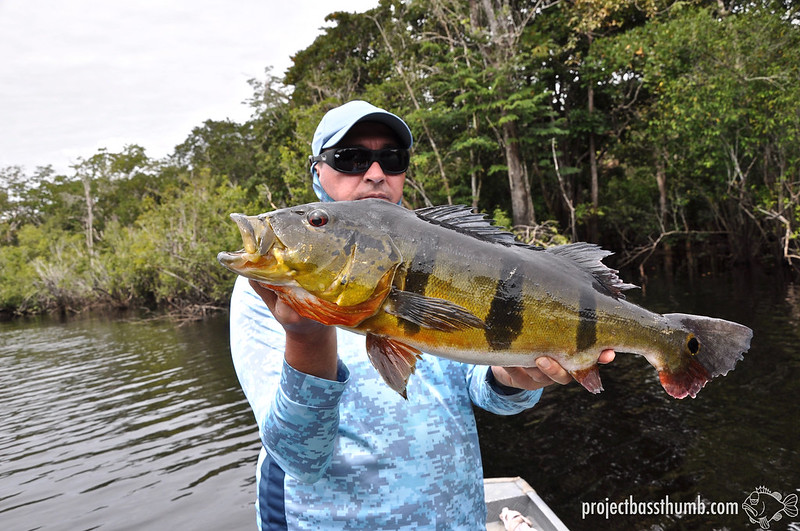 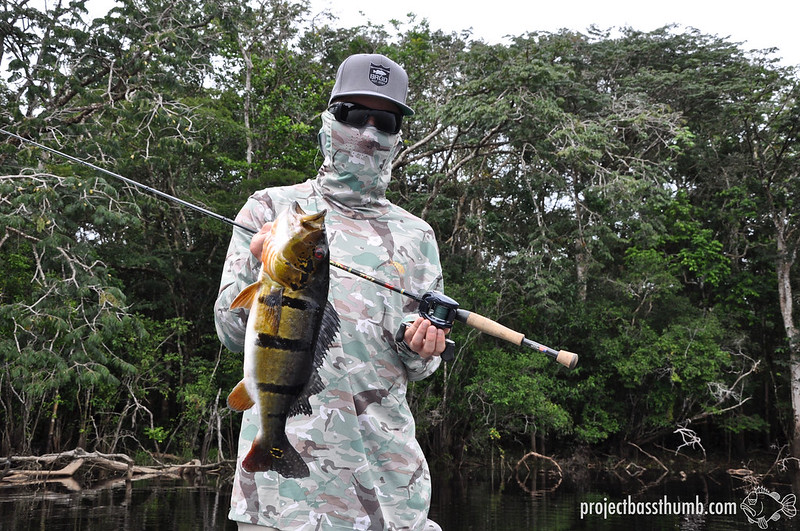 Fortunately we can't see into the future and so we got up each morning, ready to catch some monsters! Carlinho even organised a chainsaw to get into a hidden Lagoon. After cutting several fallen trees in half, pulling the boat through a drying out creek and battling angry wasps, we finally made it! 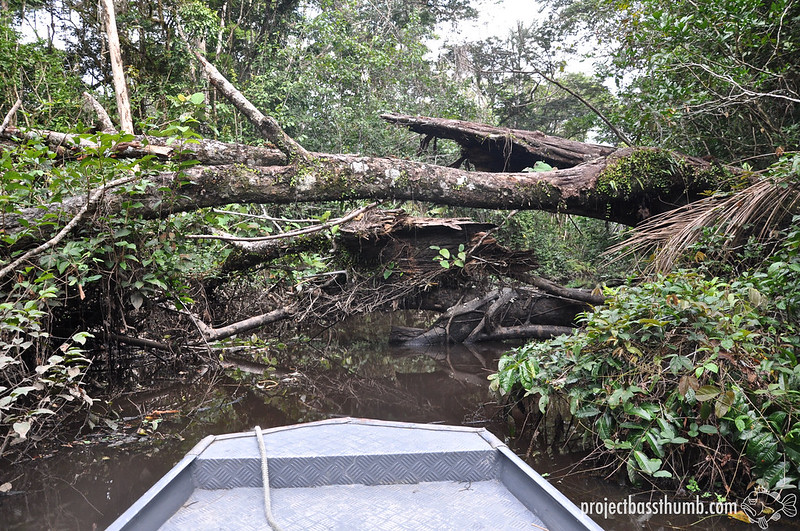 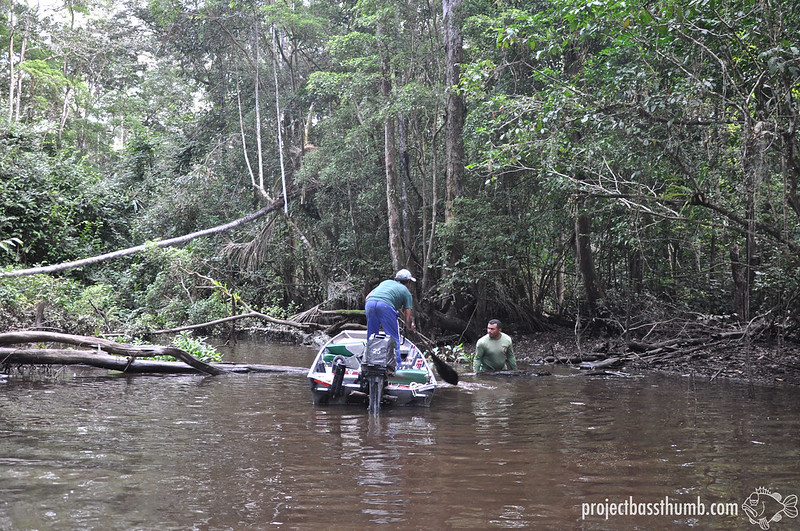 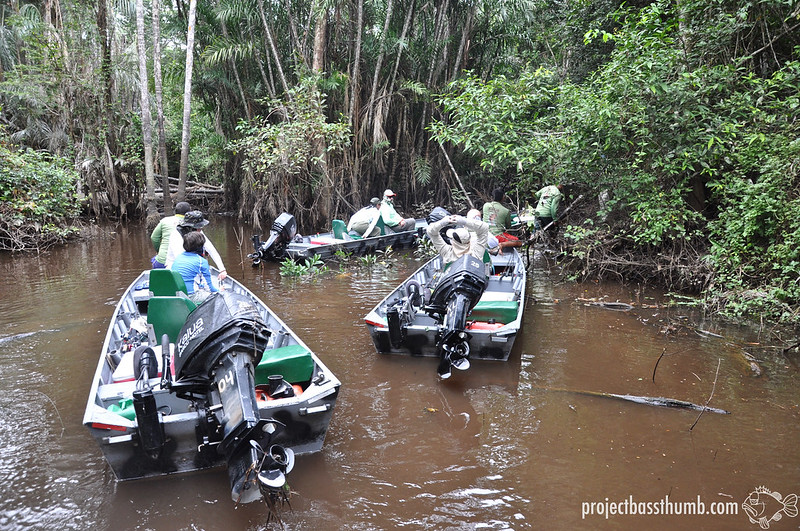 Excitement quickly came up when our guide discovered an Arapayma breathing on the surface. Of course we tried all kind of lures to catch it but the mystical fish disappeared as quick as it came up a few minutes earlier. This was already more or less the highlight of the day because we didn't get any bites except from those damn bugs! Our guide, guided by the guide of the guides, even made the extra effort and moved away some more trees to get us into the secret part of this lagoon. We didn't see any fish there but were still very lucky when, on the way out, I discovered a scorpion behind Carlinho's ear just in time to remove it before it could do any damage. After leaving this promising but empty hole of water, we spent the rest of the afternoon fishing the main river where at least we found some smaller but hungry fish. 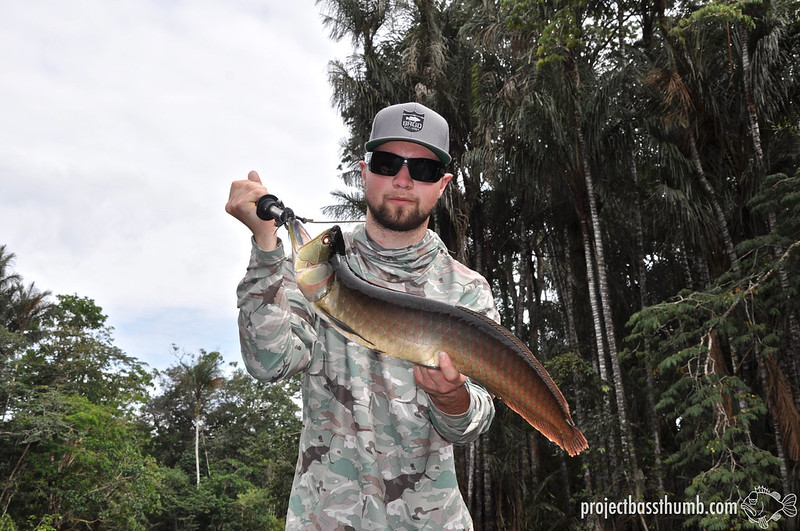 - Arowana on topwater are fun too -

The rest of the week we concentrated our fishing on beaches and pocket in the river itself where we found a bit bigger fish than the usual Popocas but fishing remained tough. We had to downsize our lures and I even had to lay away my Highrollers and Woodchoppers and fish midwater baits instead in order to catch at least something. 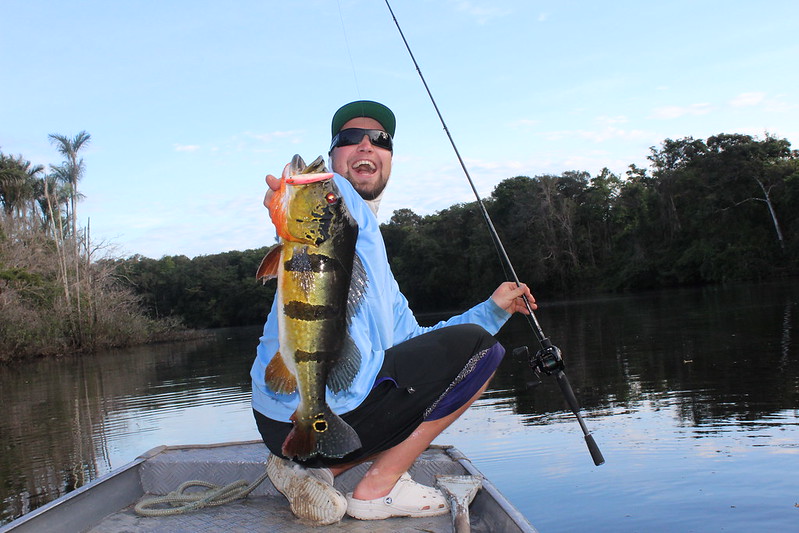 - that feeling when you finally land a "bigger" one - 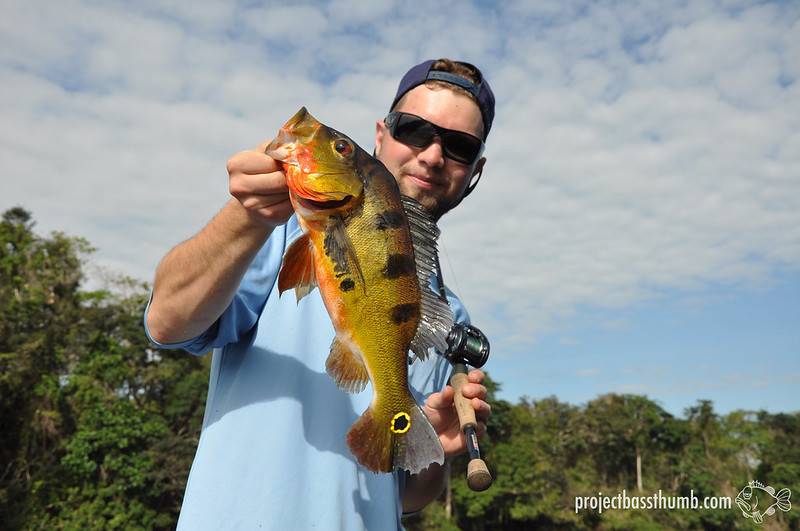 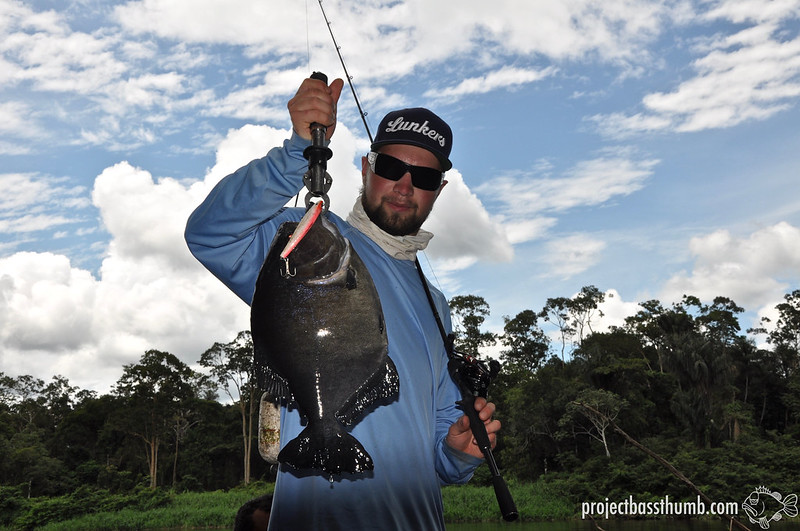 - at least the Piranhas were nicely sized - 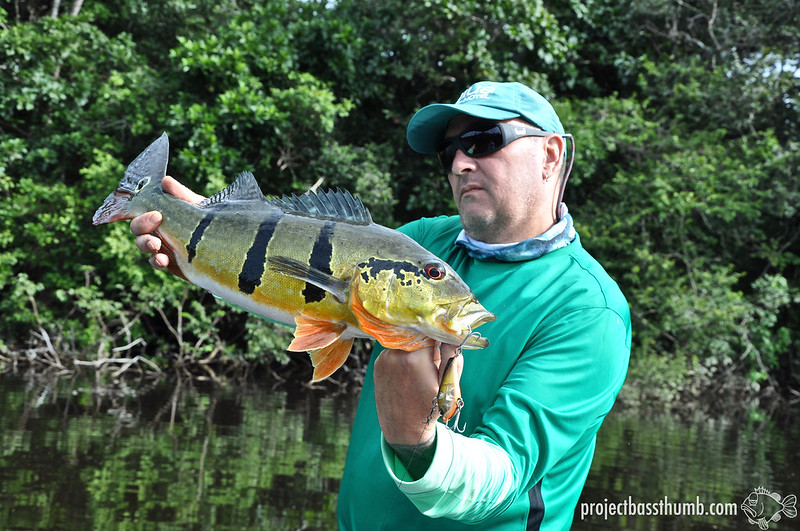 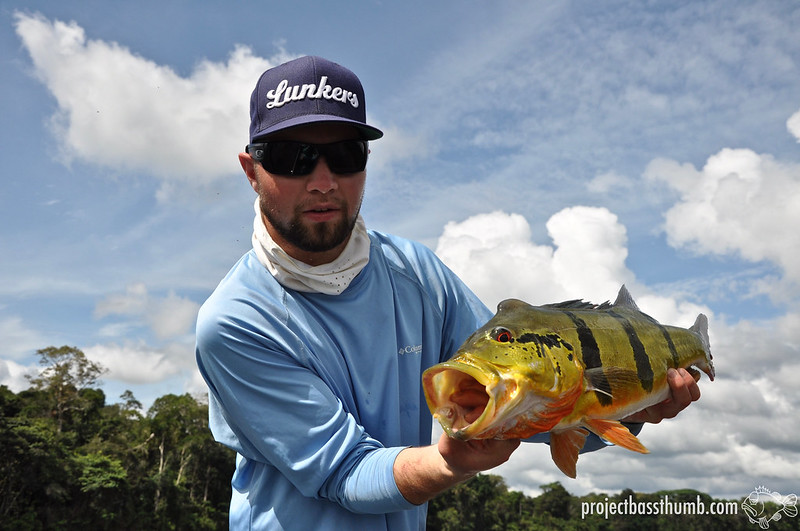 - my biggest of the week with around 7lb -

The only thing that could be found at each spot at any time was a massive amount of mosquitos and sandflies. Wherever we went, these suckers found us within minutes. Despite all this negativity, we kept casting but instead of catching fish we talked some senseless sh*t to keep us laughing and enjoyed the impressive beauty of the rainforest around us. 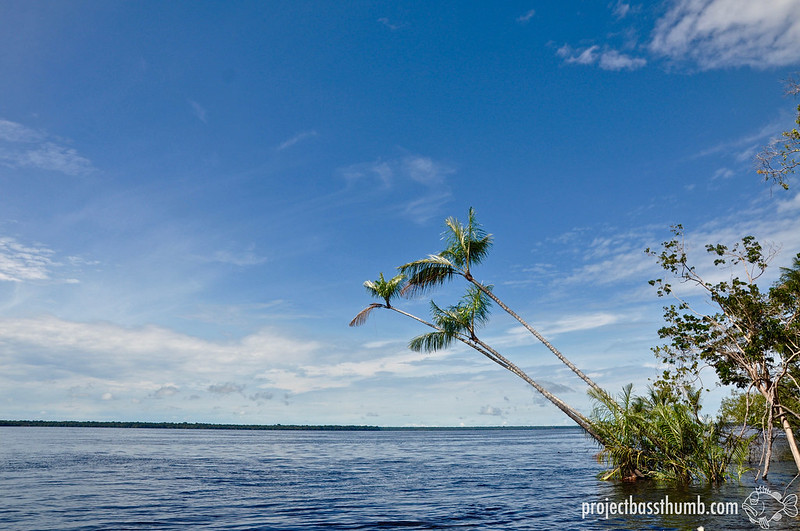 Before getting back to Barcelos, where our stay on the Kalua ended, we fished the Rio Negro. The water was still way too high and the beaches, which offer great spots for big Peacock Bass, were all under water. The whole morning I was hoping for the lucky punch that would conclude this week but in the end I got one blow-up on the Woodchopper. The 5lb Paca was then caught by Daniel on the following cast with a jerkbait... Fortunately there were two more weeks of fishing waiting for us in Colombia. With this in mind I could easily accept this bad first week without getting too disappointed. I don't want to think about how I would have felt if I had to return to Switzerland the next day... 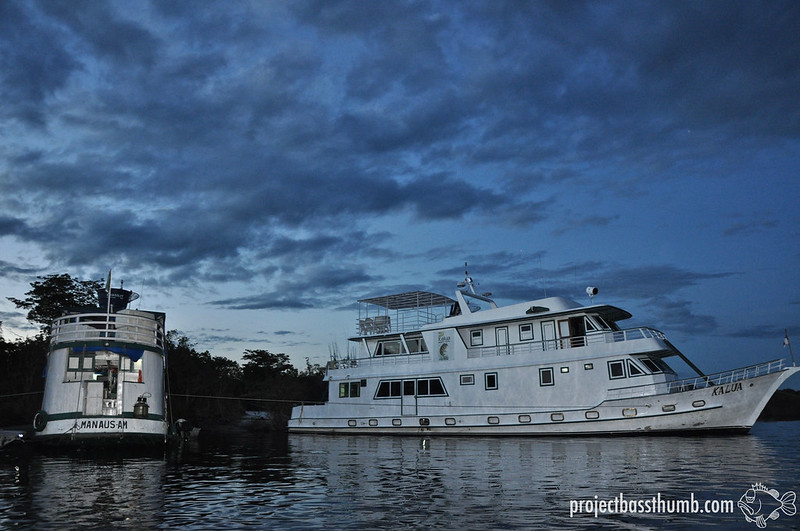 - Kalua and its supply boat on the left - 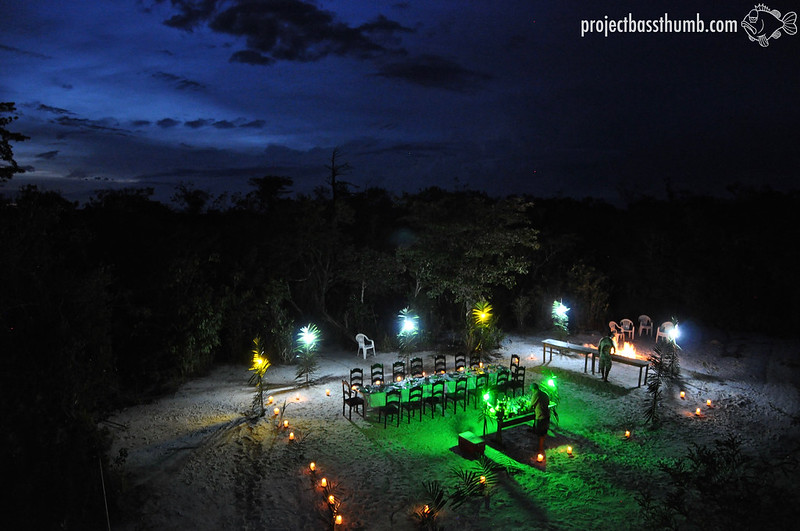 - Luau aka BBQ on the beach. I definitely never went to bed hungry on this trip! -

The fishing might have been slow during this week but I can't say anything bad about our mothership aka Kalua. Everything left a well organised impression, from the pick-up at the airport to the transport back to the hotel after returning from  the jungle. The barco hotel itself is equipped with everything necessary plus some luxury like AC, fridge with cold drinks around the clock and even satellite TV for the telenovela for breakfast :) The staff, like our guide, worked hard every day to make all aboard happy. Besides the fishing and the thousands of bites that covered my body, this week was a success and probably one of the most luxurious vacations I've been on until now. In this sence, a huge THANK YOU/OBRIGADO to the whole Kalua crew! After some rest in Manaus, we continued our journey with more flights to Panama and from there to Colombia where we hoped for the big ones! How the following weeks went you will be able to read in the next post coming soon!