After the first visit to Extremadura, Spain back in May 2021, I knew that I want to fish there again even before that trip was over.

From our guide we learned that the best chances to catch the biggest Bass possible is of course during pres-pawn.

Only a few days after returning home, I hadn't even unpacked yet, I contacted our guys in Spain to book another trip for the following spring. I'm already hyped about this trip, I have to add here! :)

But before we left, one of the locals told me that during autumn, the topwater bite there can be epic. I also was told that they were booked out for the rest of the year. Nonetheless while booking the upcoming trip for Spring 2022, I asked if there is a chance to fish this autumn too, not expecting anything. Somehow they rearranged some dates so that we could come back sooner than expected for the promised topwater bite. I thought that would be a cool opportunity for a video project again.

So with the hope of catching some fat Bass and getting some mind-blowing topwater footage, we traveled back to Spain in early October 2021.

The first day started with rain and basically no action through the whole morning. That was not really what we were hoping for but I think after all the trips I've done so far, I kinda just accepted that we usually hit not ideal conditions. Instead of getting disappointed, I tried to just keep casting, sooner or later a fish has to bite! Well, it turns out to be later... a lot later actually. The rain disappeared after lunch break and the sun started shining. That didn't seem to impress the Bass too much, they kept their mouths shut. Not on topwater, nor chatterbaits, swimbaits, rigs etc., those fish didn't seem active at all.

Well, we got five more days ahead of us, those fish will have to eat sooner or later, we thought. I'm pretty sure they ate something, mostly just not our lures. With every new day, the weather got warmer and then even quite hot but the fishing didn't change.

After the first couple of days, our guide proposed to try another lake in the area, we agreed. The scenery there is definitely worth a trip but the fishing wasn't easier at all. On both lakes we fought hard for a couple of bites per day and when one of us hooked something, all too often the fish on the line turned out to be an unwanted Zander or smaller pike. 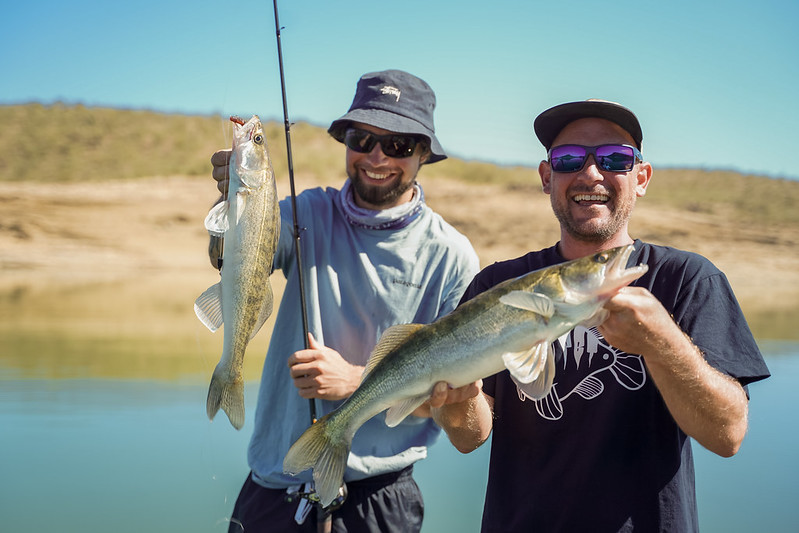 so many Zander around that we even got double hook-ups... 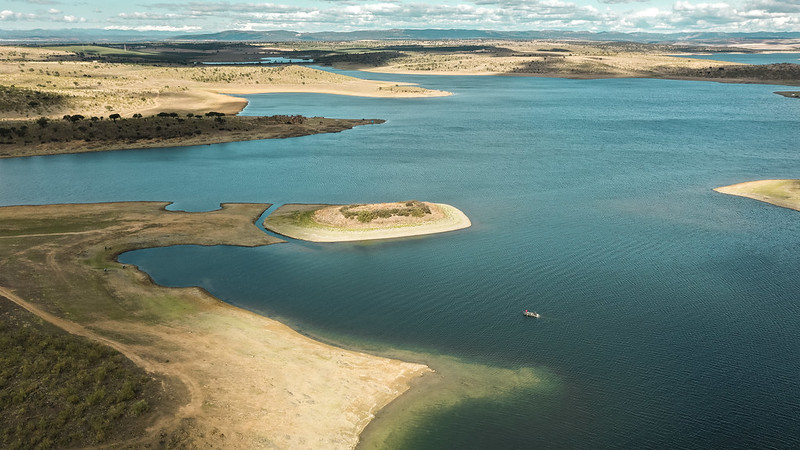 beautiful lake but where are the Bass?!

So after a couple of days on the water we basically lowered our expectations drastically from catching several Bass a day on topwater to just hoping to catch at least one decent Bass. Yes, fishing was that tough. 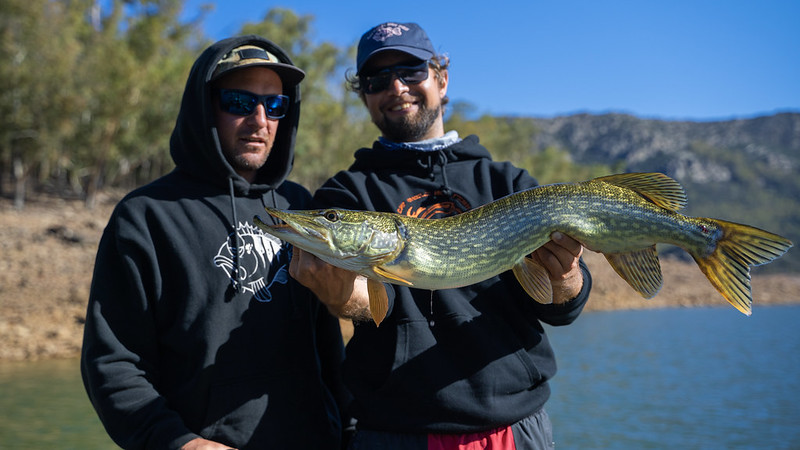 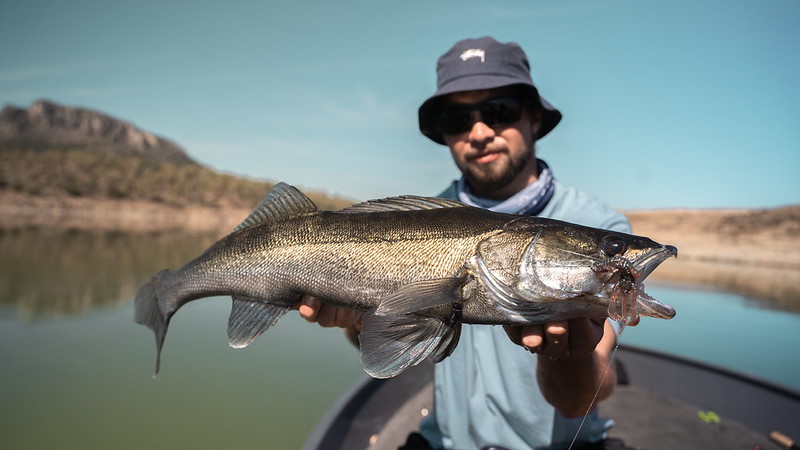 decent Zander for me on Noike Smokin Dad on the T-Rig, probably my PB...

As you can see, we caught some fish. Really not a lot and we would sometimes spend hours without any action at all. At least, from what we heard, the other boats on the water had the same problems...

Ending a six days Bass-trip without one decent Bass? - Sounds very sad to me so giving up was never an option and in the morning of the last day something finally hit my Evergreen Showerblows! 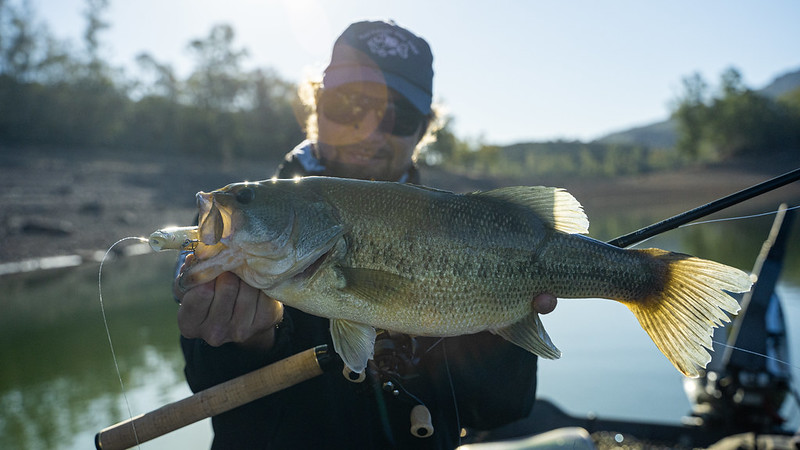 No monster but a decent bass for Europe and after five days of trying I would say that was deserved! It got even better when Adrien, the guy behind the camera who caught lots of Zanders from the back since he had not much to film, told me that he got the whole action on drone! - Well, thats cool! You can watch this video below, thank you!

After that fish, the bite didn't turn up like we hoped, besides some smaller Zanders we couldn't get any more presentable fish into the boat so yeah, that was it...

Once again I had to remember what I once was told on an earlier fishing trip "that's why its called fishing and not catching!". That sums up this week pretty well but besides the slow bite, we spent some days outside, in the nature and always found something to laugh about. That's quality time too and important for the soul! One can't always win but keep in mind, it takes only one cast to turn a slow day on the water into the fishing day of a lifetime! Keep casting! 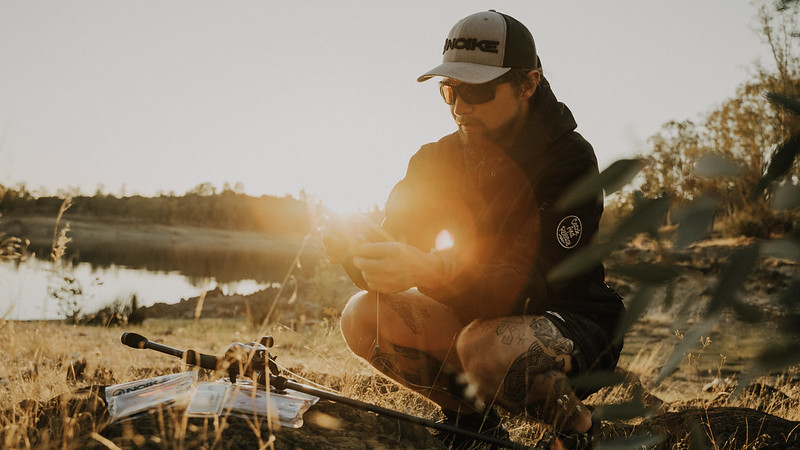