Extremadura, Spain - a place that has been on my bucket-list for a very long time, despite being way closer than for example Colombia.

Extremadura is a region (not a city as I assumed for way too long) in spain, close to Portugal. There, in the vast rural areas, several artificial lakes / reservoirs can be found. Some of them are known for good fishing way over the Spanish border. Some hold more Pike, others more Zander/Walleye and some are home to pretty decent Largemouth Bass populations. On of these lakes is said to hold some of the largest Bass in Europe and that's exactly where I wanted to go!

As mentioned before, for the longest time I thought of Extremadura as this lake of dreams with tons of Bass in it. FYI: Here in Switzerland we barely have any Bass so for the 17 year old myself, a lake where people can catch several Bass a day sounded like a dream! So around then years after learning about it for the first time I finally started to look into it more seriously. First I found out that Extremadura is an area with several lakes, then I figuered out which lake is best for big Bass and finally I found the right contacts to go fishing on said lake. Well to be honest, my friend Housi did most of the research and told it to me. I then learned even more while staying there and talking to locals.

So, our trip was supposed to be in May 2020. Due to the then COVID situation, Spain basically put its people on house arrest and nobody was allowed to leave their home except for the absolute necessary. So of course our trip was rescheduled for the coming year.

In May 2021 the whole situation was calmed down and the journey to Spain could start!

Housi couldn't come but another fishing buddy of mine, Jänu, jumped in and so together with Andres aka T-Nerd Productions we left in  a rainy morning early in May. Around 21 hours in car later we finally stepped out at the shore of the lake which we would be fishing for the next six days. I was happy to finally do some serious fishing for Largemouth Bass again, it's been way too long!

And the week started promising with this beauty which I caught on the first spot on a NOIKE Smokin Dad on a T-rig. With 2.6kg (5-6lbs) a very good Bass regarding that Largemouth Bass over 3kg are already very rare in all of Europe and the lake record there stands at something over 4kg ( around 9lbs) from a couple years ago. 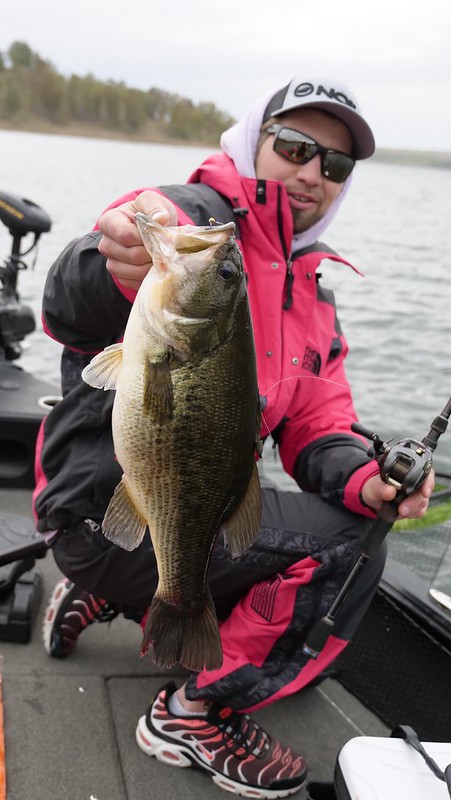 After this fish, the bite seemed to be completely off... We were already told that the conditions might not be ideal since the weeks before the temperatures reached 30-35 Celsius every day until only a day or two before our arrival the weather changed and temperatures dropped drastically as you might see on how I'm dressed on the picture...

We kept casting and changing spots, soon we realized that it probably won't be as easy as we pictured it when the trip was booked. But then again, who doesn't hope for THE perfect fishing? Reality usually just looks a bit different but then you either get pissed and ruin the mood of everybody or you stay focused, use ur knowledge while always being open to learn new things that f.e. the guide tells you and just keep fishing! We continued with the second option while keeping us entertained with telling bad jokes and other rubbish. :)

After lunch break the guide suggested to try some chatterbaits, which I never really used before. Jänu and I both became fans pretty quick as it turned out to be the one method that would at least produce a fish from time to time. 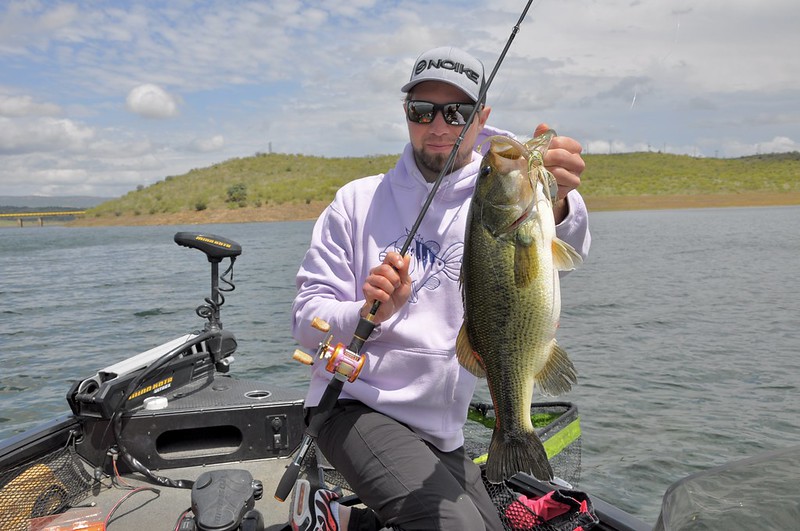 - second fish of the day and my first chatterbait bass -

We ended the day with a total of 4 Largemouth Bass plus some Pikes and Zanders which seemed interested in chatterbaits too. Way more than we are interested in them but it's always nice to get a bite from time to time, right?!

The following days went usually the same, weather changes from rain to sun and back within minutes plus a lot of heavy wind which made us mostly fish chatterbaits around and in the vast fields of underwater-vegetation and whenever the winds would allow it I tried a more finesse approach with T-Rigs in the fishy looking rock formations. 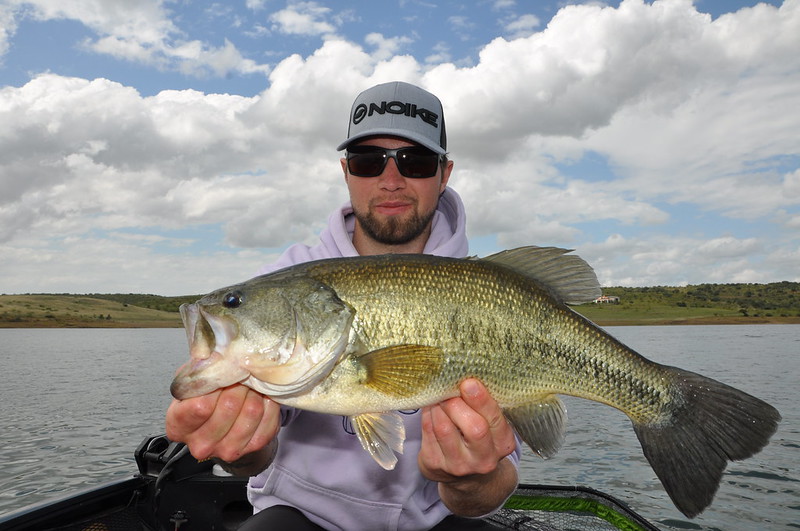 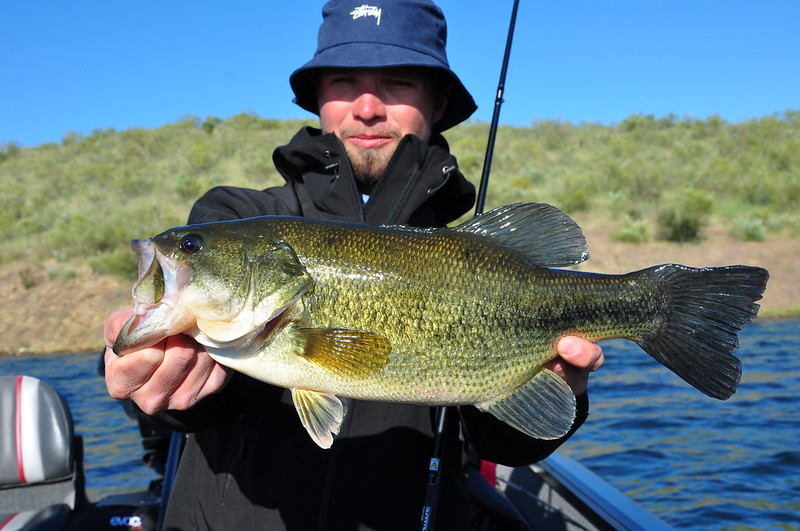 - I still don't remember why I wasn't wearing shades then - 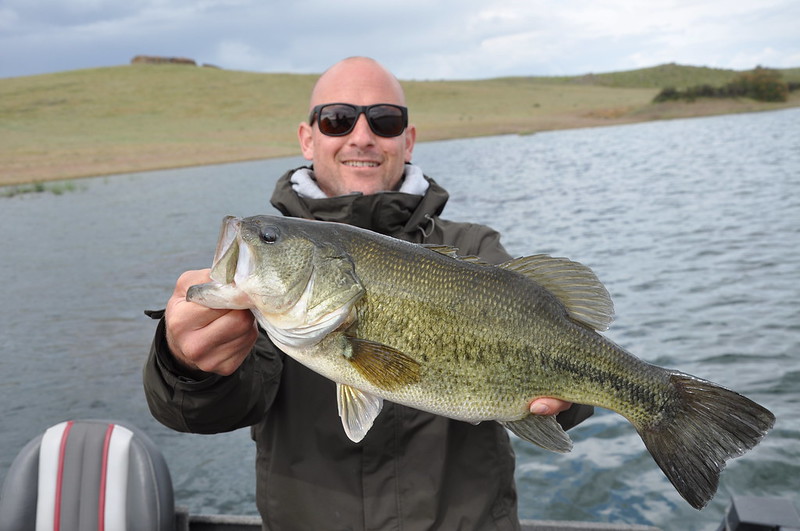 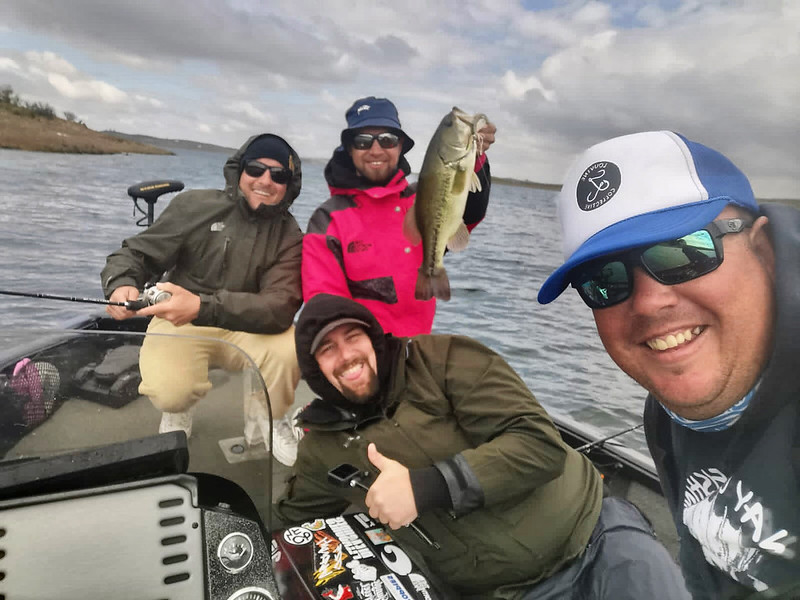 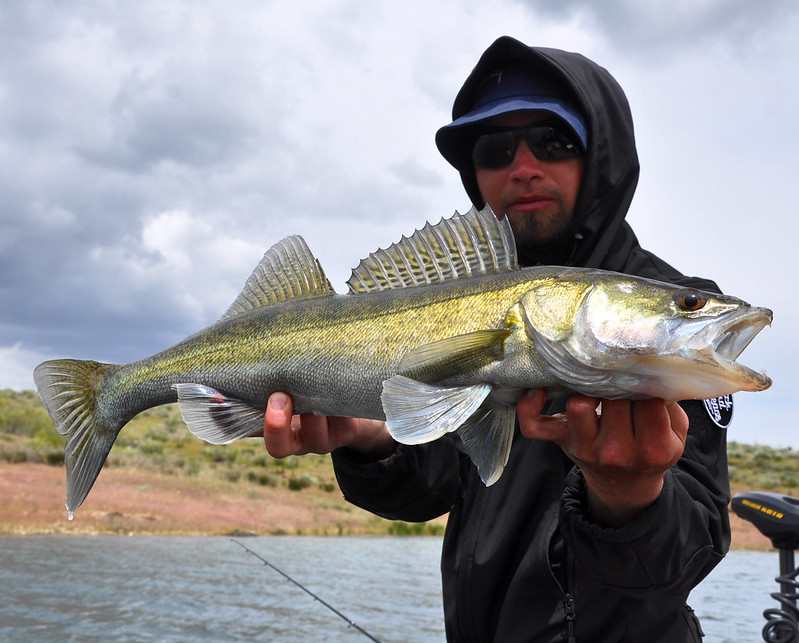 - one of the "unwanted" Zanders. they look pretty cool and I'd love to catch a big one but the average sized ones fight like a stick - 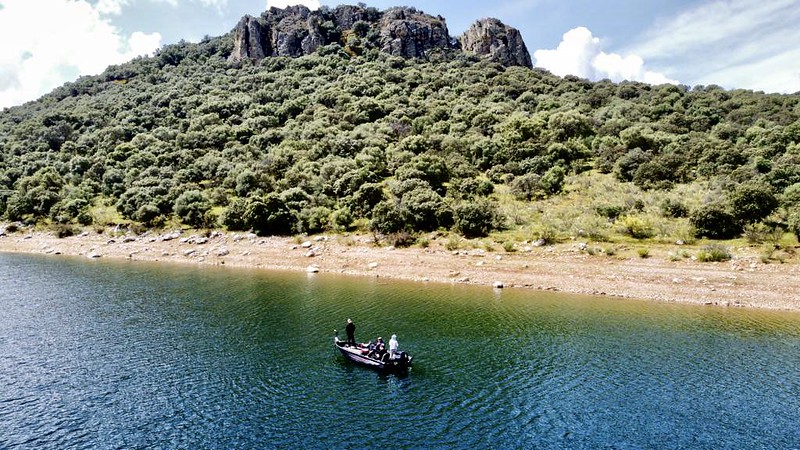 - one of my favourite drone shots, I just love that kind of landscape - 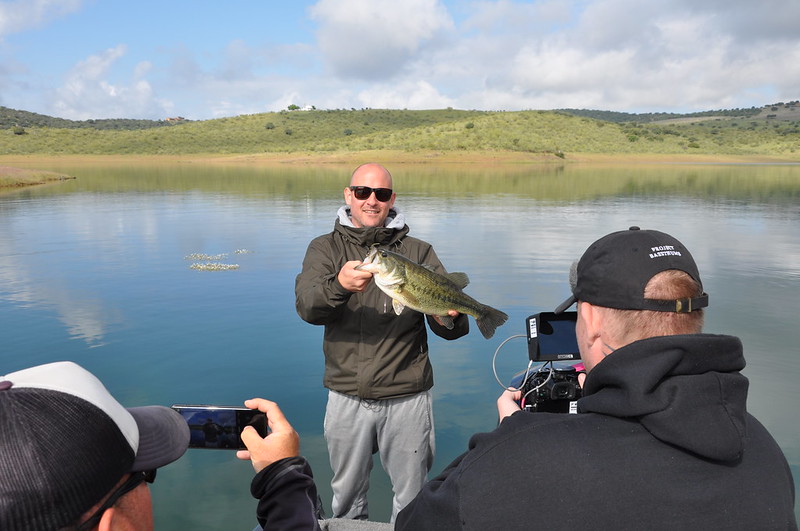 Our good friend Ändu aka T-Nerd Productions was with us on the boat which resulted in an amazing video series about our trip. So, instead of writing about too many uninteresting details and events I probably would mix up anyways I invite you to watch the videos below to find out how this week worked out for us. Get ready for some impressive footage, live inputs of myself and even some fish!

to round this up here the quick stats - on every single day we caught 4 Bass between the two of us plus some smaller Pikes and Zanders. 4 Bass doesn't sound like a lot for a full day of fishing non-stop, depending on where you fish of course. We honestly were hoping for a bit more too but it should also be added that all the Largemouth Bass we caught were solid, healthy fish of 3-5lbs each. I personally prefer to catch a couple decent ones over various small fish. I don't see much sense in specifically catching small fish and risk to do them damage at sucha fragile age/size. Let them grown in peace until they can put up a proper fight, have higher chances of surviving being caught&released and also spawn to secure future generations! 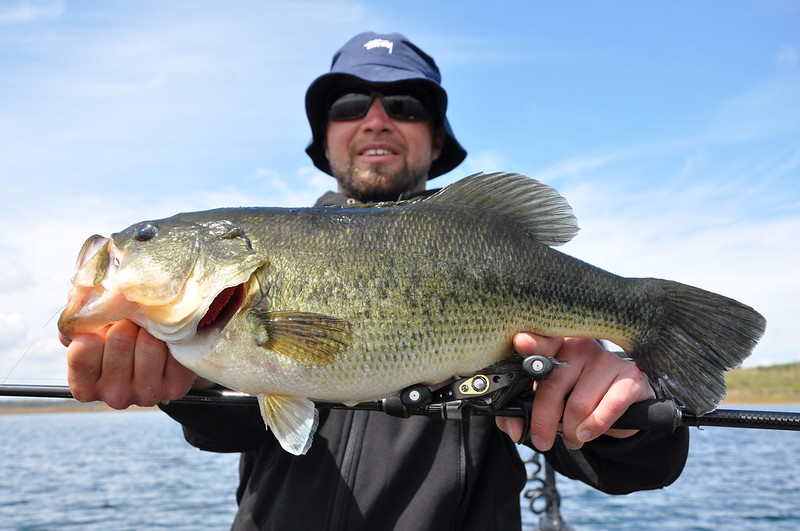 - biggest fish of the last day -

Nonetheless, I quickly became a big fan of this lake and the people who took care of us! The guides told us how good prespawn there can be so we booked two weeks in early spring of the following year. So I hope I will be able once again to show you some more fishy pictures. We booked two weeks to get a better chance of hitting at least one or two good days as nobody can precisely predict the exact time period when the Big-Mama-Bass will be do their pre-spawn feast. With 14 days on the water ahead of us, I'm looking forward to an interesting time of observing the fish act over a longer period of time and of course I'm hoping for that +3kg Largemouth Bass! 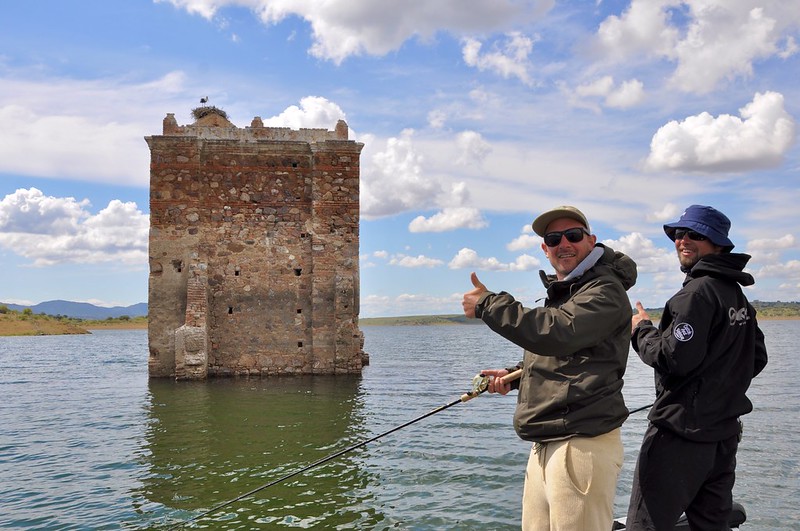 - next time, I definitely have to catch a Bass out of this old church - 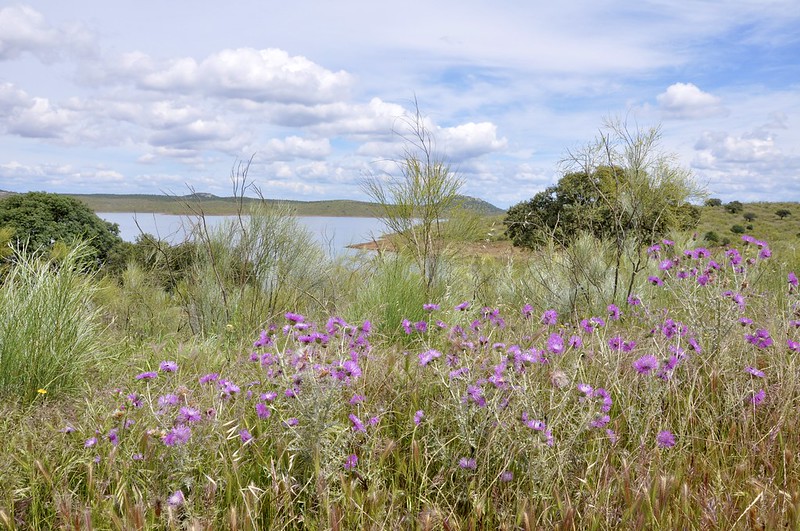