It seemed just perfect, over the last months Housi and I observed the water levels on a daily basis. Finally, after hitting not so great conditions the seasons before, we would be fishing perfect water for the first time in our "Peacock Bass careers".

When we checked the latest stats again before boarding the plane to Bogota, the rivers looked more than promising. I already imagined myself getting giants on a daily basis...

But first we had to endure long hours in planes which isn't really my favourite part of traveling. Whoever flies economy class probably knows what I'm talking about - trying to find a "comfortable" position, desperately hoping to fall asleep because each minute asleep is like a minute less waiting to land again and then there are crying babies, I feel like whenever I board a plane a baby on there starts crying... Fortunately I've always managed to stumble out of the plane before going completely nuts. This time didn't make any exception.

We landed in Bogota on the 31tst. of December, New Years Eve. Still dizzy from the flight we found ourselves in the streets a few hours later, welcoming the new year with people we just met. The following day we spent recovering from the flights and the Acuardiente, Bogota's high altitude wasn't helping. At least it was raining the whole day, so at least we didn't feel like missing a lot.
At this point we didn't know that it was raining far away in the jungle too but we were to find that out soon enough.

From Colombia's capital to the jungle was the plan for the next day. On the final step, a 4 hour boat ride to the camp far in the jungle the first surprise, I was freezing. The continuous rain made the long drive rather unpleasant but I quickly forgot about all that when we finally arrived. A few tents in the middle of the jungle, sounds quite cool, doesn't it?! 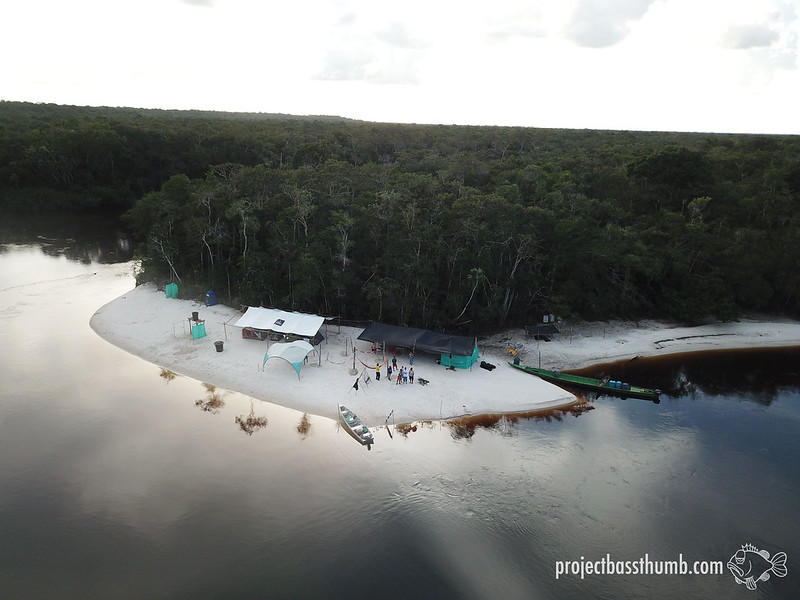 Immediately after arriving the whole group started unpacking and preparing their tackle. I was pumped to finally be in such an awesome place again. Then the bad news hit when the locals told us that the river, in perfect condition when we left Switzerland, had risen for the last days between one and two meters. Talking about us finally hitting the right spot at the right time...

Fishing would be a lot more difficult than we expected it to be.

Anyway, right after getting up the next morning I made a few casts in front of my tent and got a good bite.

An hour or so later while driving up on the first spot the water in front of us was boiling, big fish along the shore. Housi caught two middle sized ones on the first casts while they ignored my lures completely. After that we spent hours looking for the next fish. At least the sun came out, heating up everything around, us included. Because of the heat I was already about to see trees walking around when I finally hooked my first fish - a pretty Lapa/Paca. 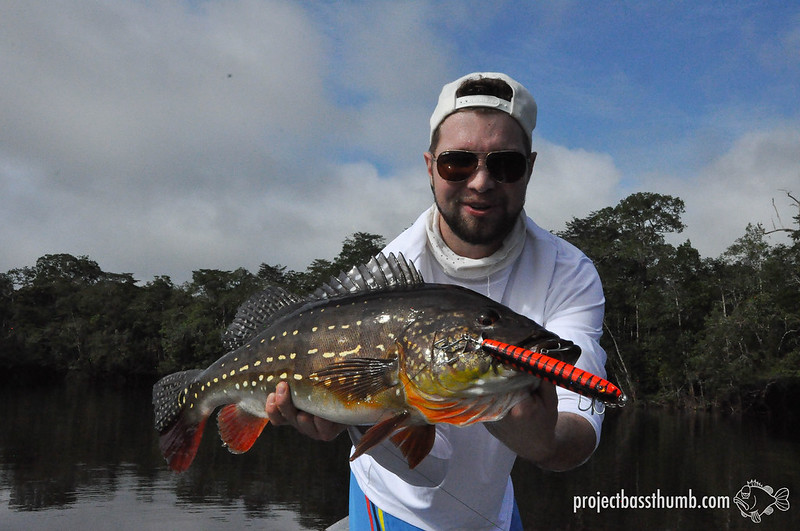 While it got hotter and sweatier by the minute, the fishing stood difficult. Now and then we both caught a fish but nothing mentionable. Plus the river level was still rising what probably explained the fishes passivity.

Day two didn't bring much change neither. Fishing was hard but of course I didn't stop casting, on every cast there was still a chance for a monster Peacock! 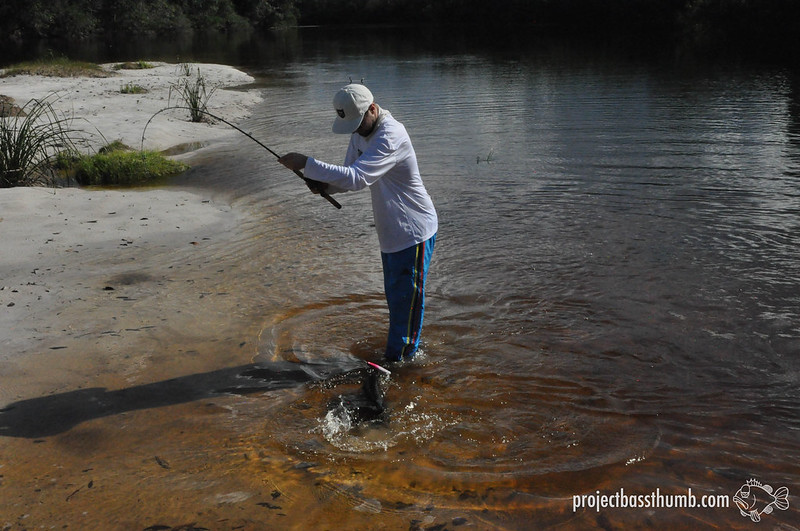 how to risk some trebles in your legs 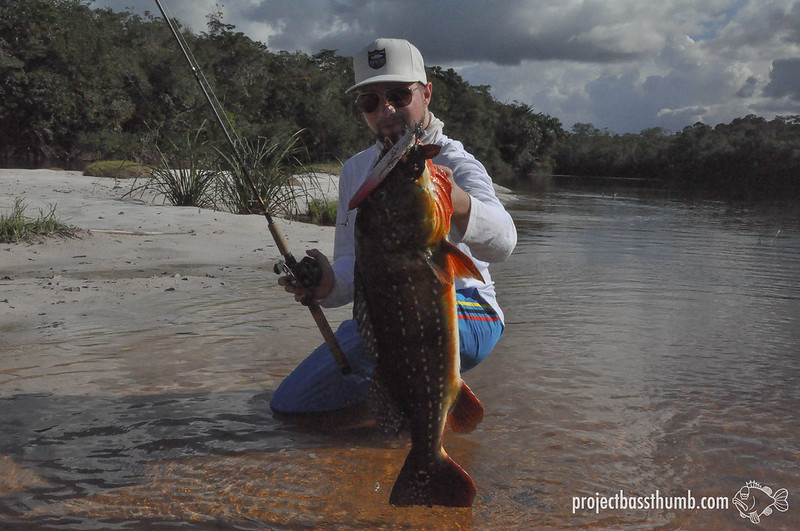 and what about a nice treble in the finger? 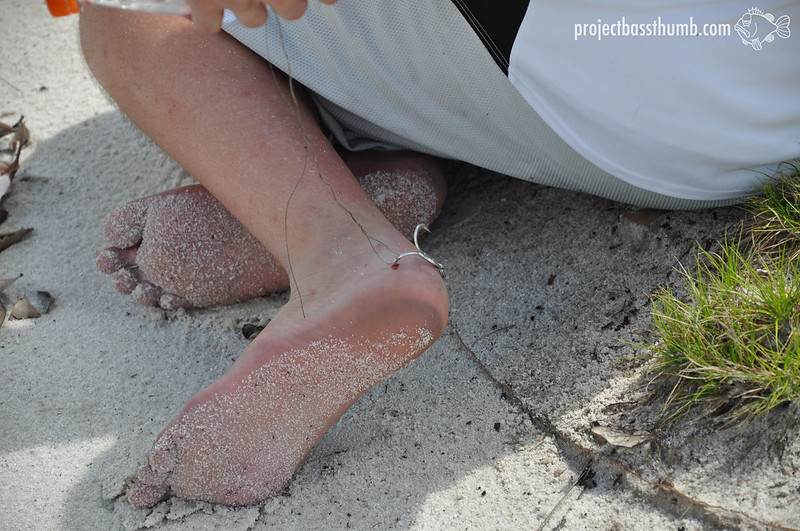 while I kept my body treble free, Housi literally jumped in one... 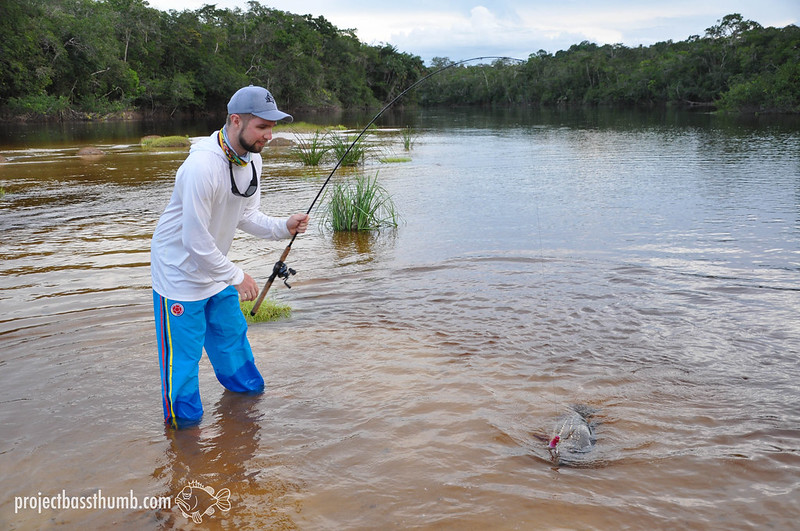 another day, same spot, same scenario (this time even with the camera on the right settings) 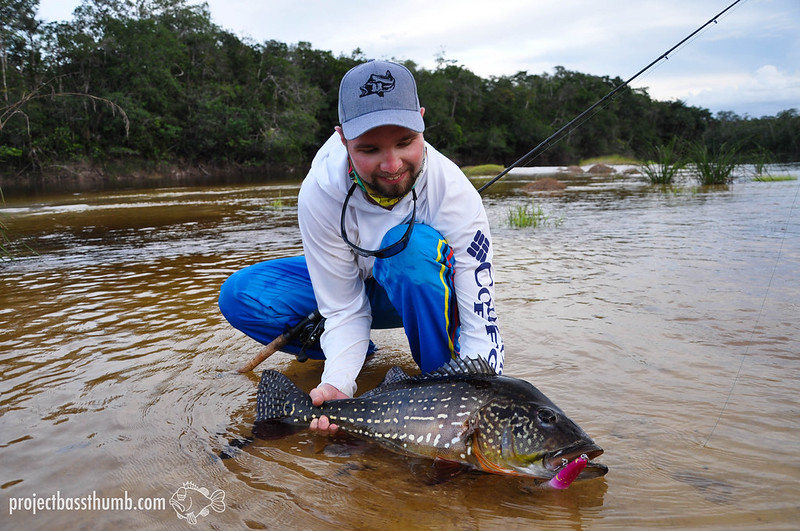 the most beautiful Lapa I've caught so far! 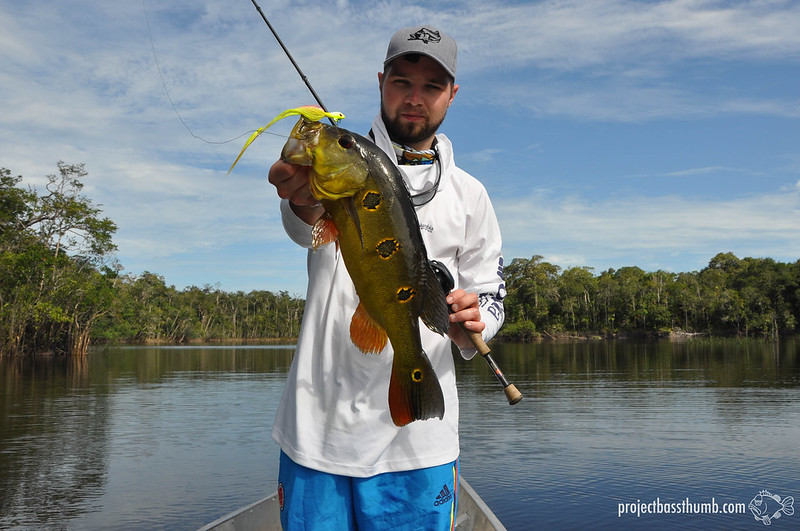 fishing has to be real slow for me to tie on a jig but then again catching a nice butterfly on "light" tackle is cool too... 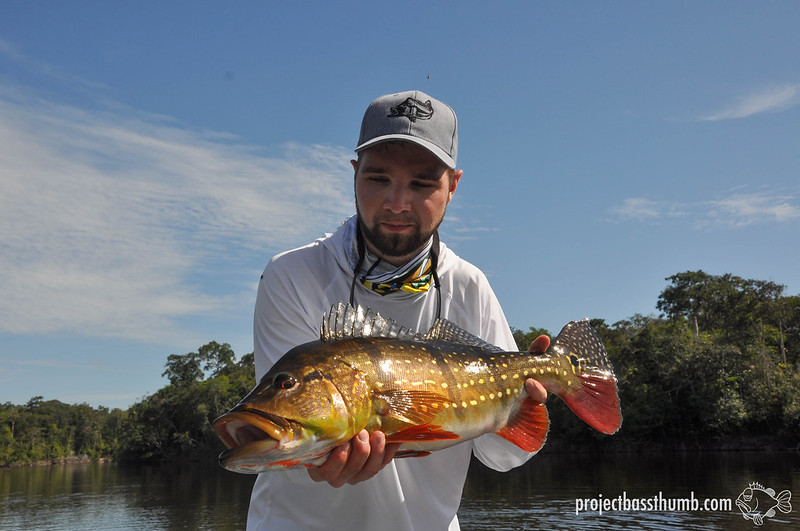 ...and it gets interesting when one of those middle-sized fighters jumps on it out of nowhere! 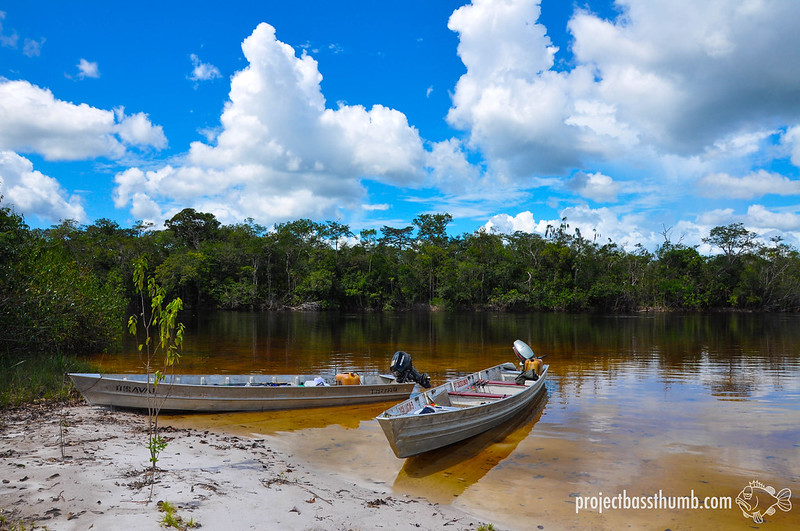 beautiful lunch spot - what you don't see are the millions of sandflies lunching on us.

at McDonald's you get a free toy with your happy meal, here the meal comes with nasty bites in your face

Day 3, the sun was about to rise over the trees when out of a sudden something big hit my lure right when it passed a point in the tree line. I observed the whole action from the front of the boat and a hard fight started. A few stressful runs later, the huge fish finally laid secured in the landing bag! My joy grew even bigger when the scale stopped at something over 21lb - new PB!

Big thanks to my boat partner for the day, David who did an excellent landing and photographing job! Gracias amigo! 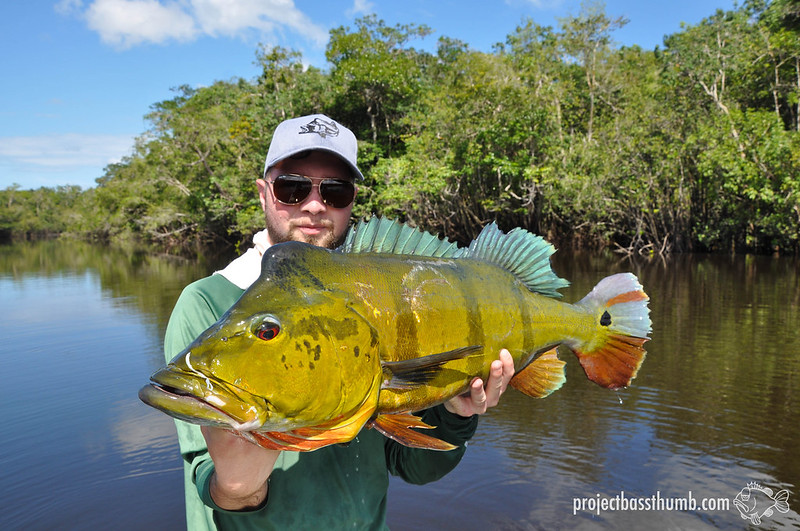 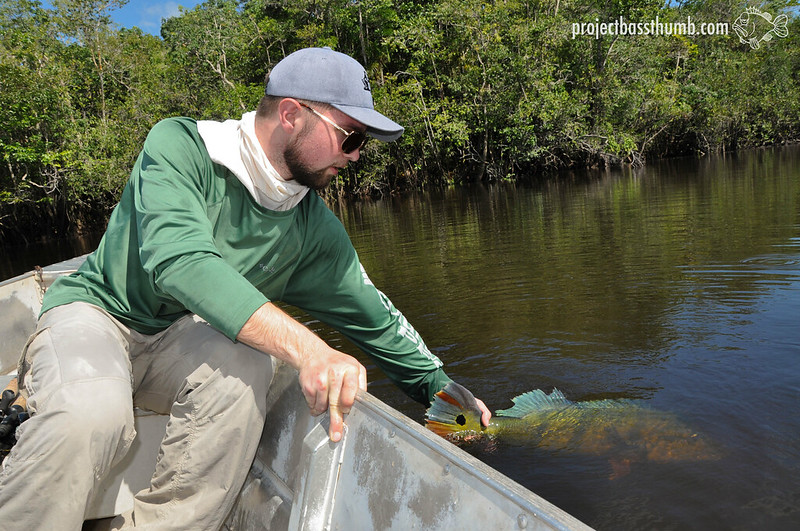 Within the next half hour the two of us hooked five more fish in this size but none of them hung for more than a couple seconds...

After these entertaining minutes someone seemed to have turned the switch back to "not hungry at all", we barely saw any fishy activity despite changing spots and lures over and over...

Each day I told myself that today will be THE day just to catch even less than the day before.

Was I disappointed? - Well, it's quite hard to be sad in an impressing piece of planet like this, sharing camp with a bunch of awesome people but of course I would have liked to catch some big fish too. All I could do was giving each day my best and throw them lures around from sunset to sundown. 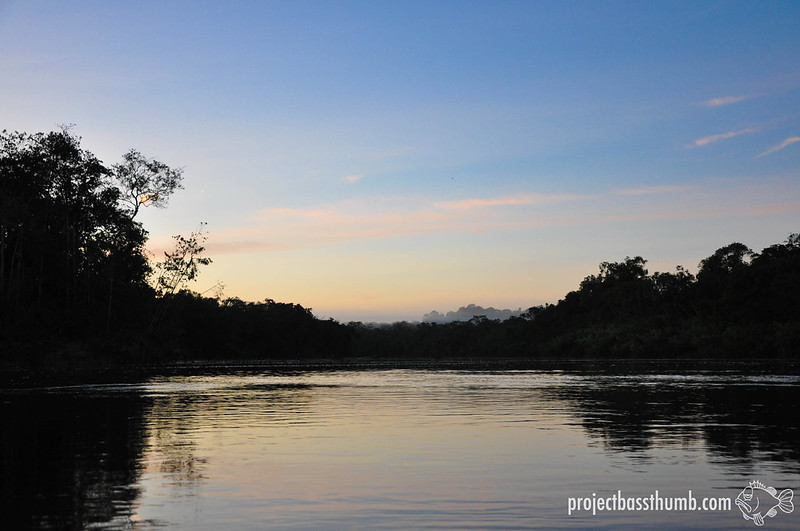 waking up to this, right on the beach - how can one be sad? 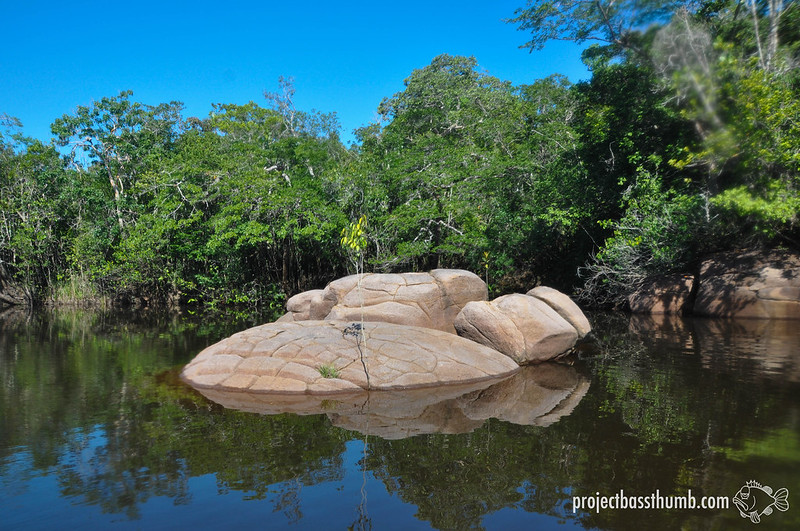 a tree that probably thinks he's a stone 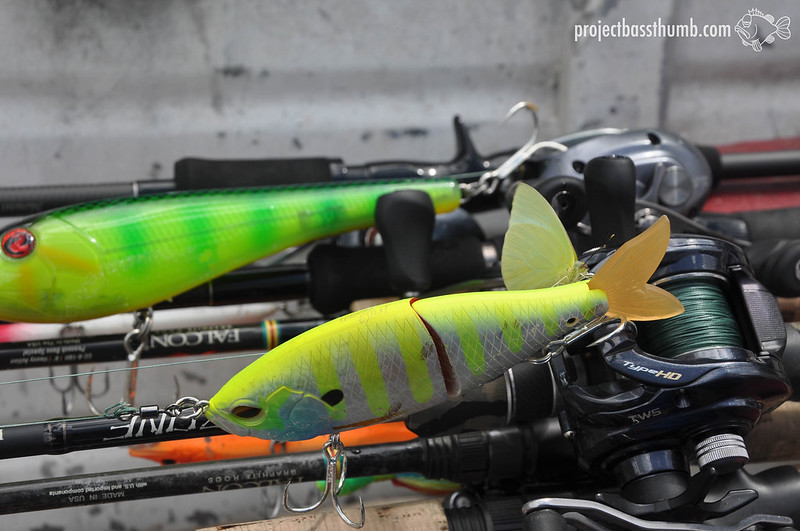 at least the butterflies showed interest in my lures 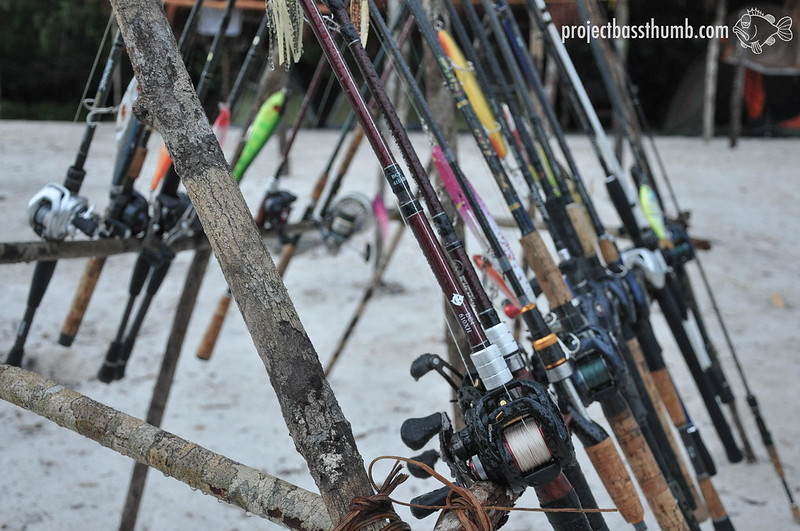 part of the weeks line up 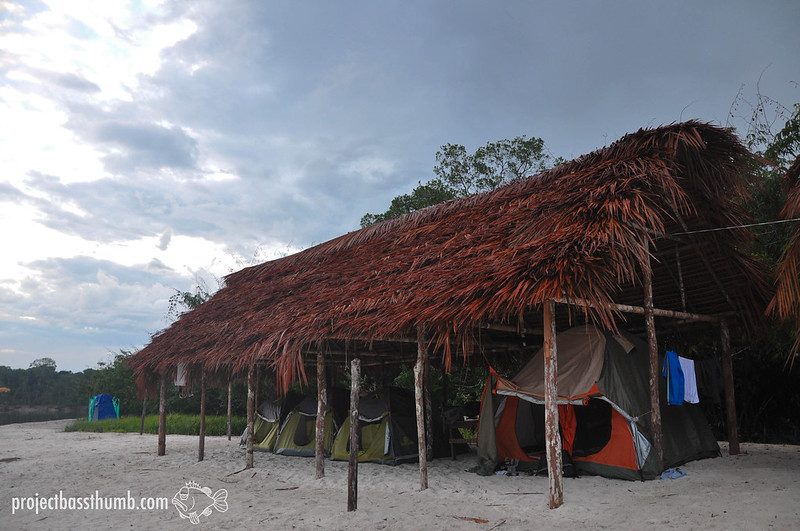 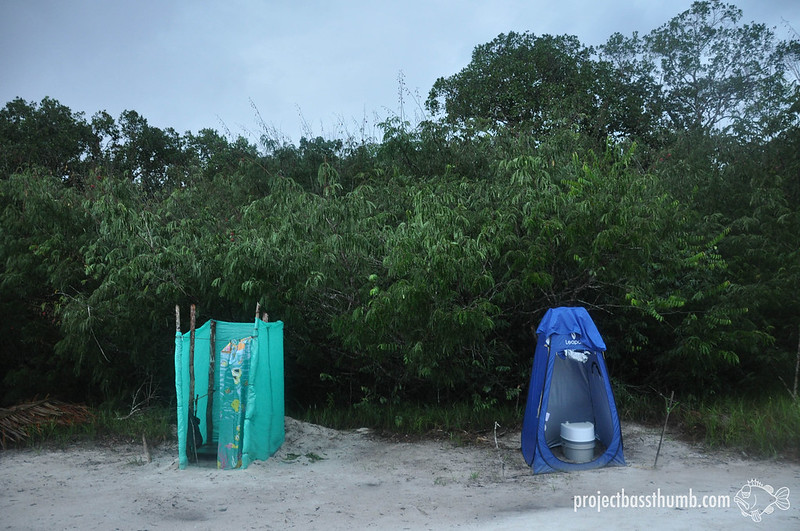 pro tip: always check the bowl for snakes before sitting down 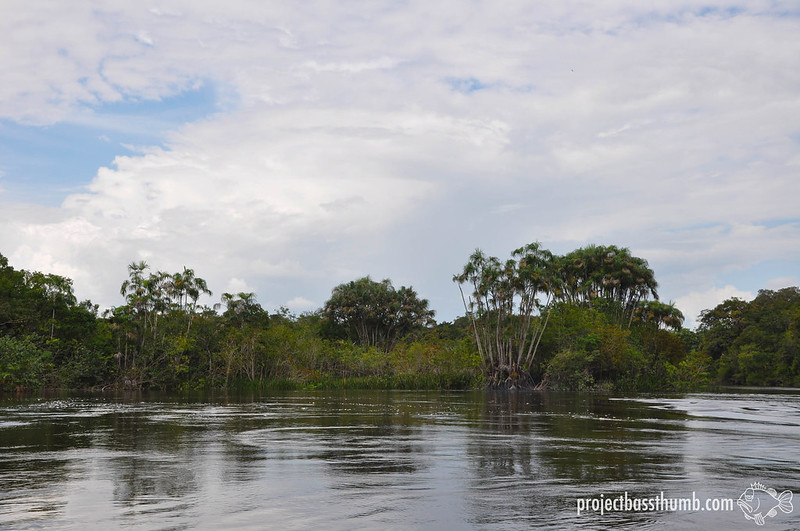 The river kept rising steadily over a few days what might have confused/displeased the fish. Or I just can't fish but then again the others guy's didn't do much better neither so I think I will stick with fishing for now. :)

On the last day, the water finally started to sink again. What didn't make it any easier for me to look forward to leaving the jungle. At least we could still fish until afternoon and after saving Housi's lure one again from a tree, that he swore wasn't there when he casted, out of nowhere a big one hit my lure. Finally! 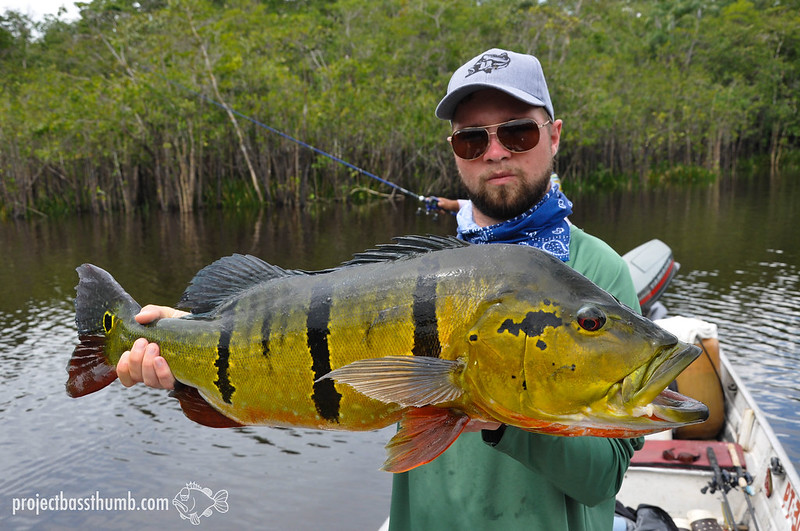 btw. behind me is our guide producing a nasty backlash while we handled the fish.

we taught him how to use a baitcaster in the morning before leaving...

The sinking river seemed to wake up the fish because finally we saw them hunting and got bites every now and then.

We decided to hit a lagoon where Housi lost a good one a few days earlier but we couldn't find him. Instead I got to experience one of the coolest bites ever. Out of nowhere a huge fish appeared behind my lure, it follows for a couple of seconds, dives down just to hit the lure with full power from under it. The brutal bite almost threw me in the water but luckily I landed in the boat! An awesome fight later Housi landed the beautiful fish which was just a few ounces shy from 20lb. 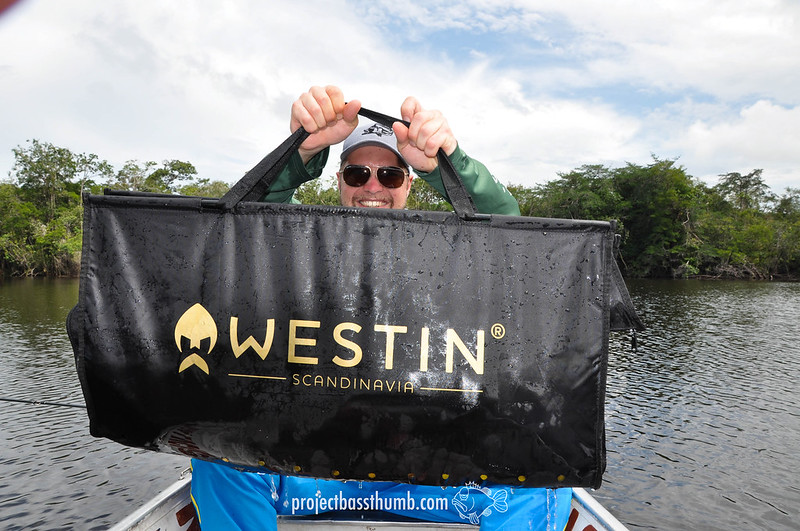 a bag full of Peacock Bass!

(see how to use this bag here!) 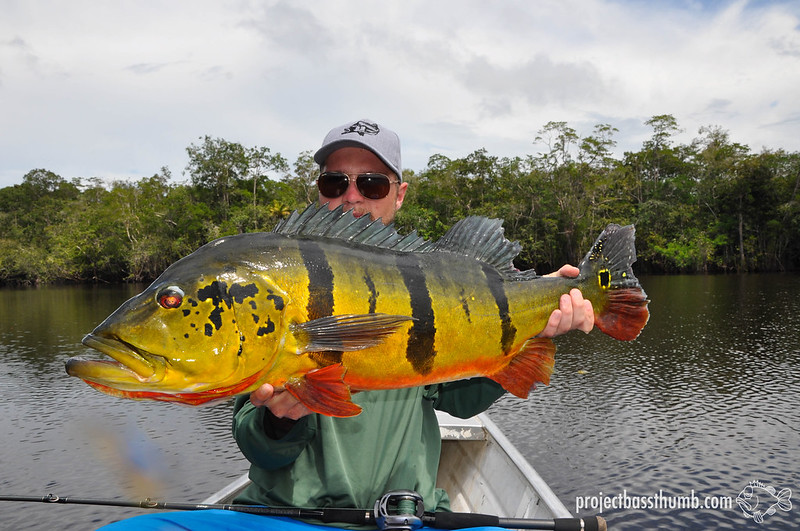 Great day so far and we still had a few hours left. I even lost another nice fish in the 15lbs range which would have bothered my way more if I hadn't caught the other two and some change before.

In the last hour Housi finally hooked a good one, a really good one, a "drag the boat around the lagoon" sized one!

The fish ran into heavy cover but my dear buddy managed to get him out. What a monster! (the fish, Housi isn't that monster like :) ) Right when this huge Bass was untangled, our guide, instead of paddling out, he drives the boat right at the cover, the fish disappears in it and a branch then cuts the 80lbs braid. I was lost for words... "WTF are you fckin doing?!" laid on my lips but anger wouldn't have changed anything - THE fish was gone! Our guide knew what he did despite him blaming it on the bad "nylon" we were using. (Daiwa Samurai Braid). You might win some but you just lost one, that's fishing.

I would have been so happy for Housi getting his first 20lber but at least like this we have to do more trips to the jungle until he gets one! :) In this sense he might have lost a monster fish but he won more time in the jungle with me (if this can be seen as a win and not a burden :) )

The rest of the trip is summarised quickly - drive back to civilisation, eating, trying to sleep in a normal bed again, fly back to Bogota where the big city seems so stressing after the tranquility of the jungle.