After several people asked me about the tackle I use on my latest Peacock Bass Bass trips, I decided to write an article about it. First of all, I would like to state the following is all based on personal experience and preferences. When I was preparing for my first Peacock Bass trip, I mostly followed the advice of my fishing buddy Daniel who analyzed tons of articles in the internet around this topic. Since then I continuously updated my arsenal according to my newest findings after each trip. At the moment I am pretty happy with my line-up and hope to be able to put it in use again soon and then again and again and again... you probably got it! :) Choosing the right tackle is all about preferences and of course depends on the species you  fish for and the techniques you use. There is not THE rod or THE reel, each angler has his own opinion about the perfect combo.  This article describes the tackle I use for targeting trophy Peacock Bass in the Brazilian and Colombian jungle, fishing all kind of artificial lures from big Woodchoppers to Deep Cranks. Of course there are still some additions and changes I would like to make as well as new tackle I'd like to try out. Due to my actually very limited budget it takes some time till I saved up for something new and other stuff I just have to leave out for the moment. Anyway, I hope you enjoy the following lines! 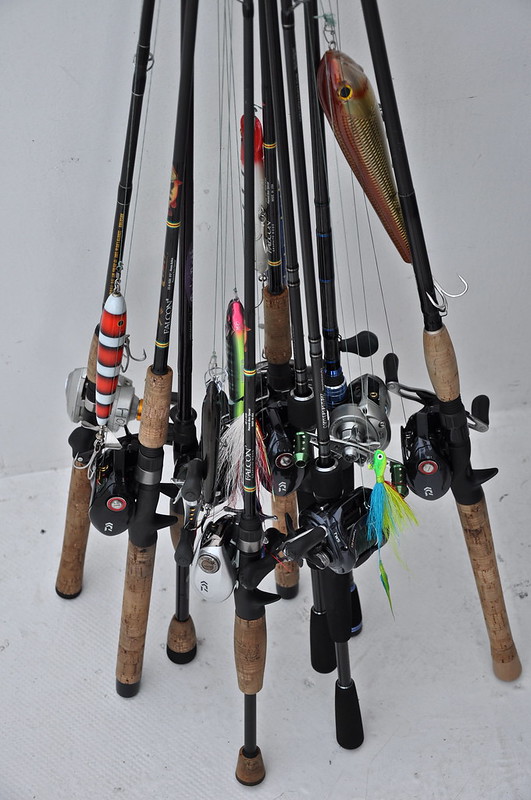 Rods One thing that fascinates me about Peacock Bass is their strength. As one of the hardest fighting freshwater fish, they require heavy tackle to bend them. After losing the first Big One to some trees or other cover you wish you had used a stronger rod than your med-heavy Bass-stick. Been there, done that. Choosing the right rod depends on the lure you want to fish. For Peacock Bass I mainly use three types of lures: topwater, jerkbaits and jigs.

In general I recommend short but powerful rods. Short for an easy handling and heavy action for standing a chance against these brutal fighters. Actually there are not many rods known to me on the market that fulfill my requirements, most rods I've found are too long. One exception makes Falcon with their Peacock Bass series which quickly became my favorite rods. Unfortunately the brand discontinued the production of my favorite model, CC-8-163H, so I hope the two I own won't break anytime soon or at least not before I found worthy replacements. Another issue for me is the money. there are several other rods I would like to test like the Deps Huge Customs but I just lack the money to buy them. At the moment I am happy with the rods I have but of course there is always something to improve and rods to add. 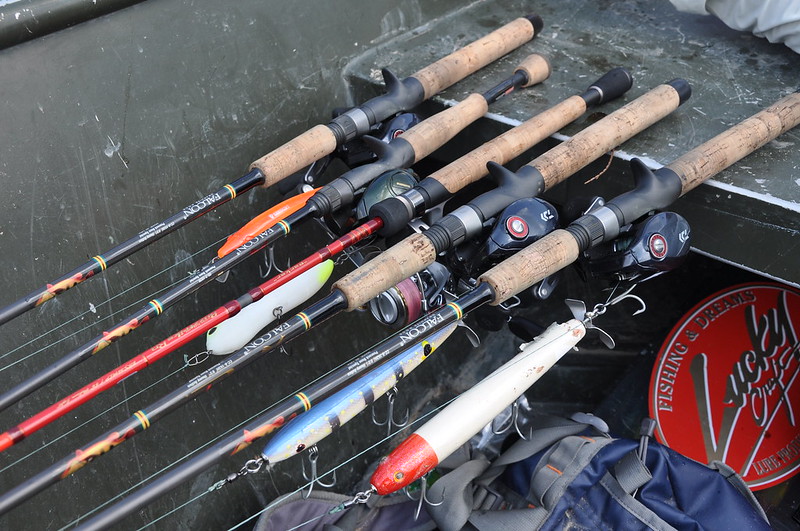 - did I mention that I like the Falcon Peacock rods? -

Reels Peacock Bass like it fast and hard, so chose your reels accordingly. I fish reels with a ratio of 7.1:1 or faster, big line-capacity and which are strongly built. A widely used classic is the Shimano Curado which I use myself. But my favorite is the Tatula HD from Daiwa. With its robust body and break it hasn't let me down yet plus the deep spool allows to put on roughly 90-100m of 80lb braid. I also fish the JDM version of the Tatula HD which works a tic smoother but on the other hand feels a bit more delicate. For this reason I use the JDM version mostly for jigs  and for the rest I stick with the USDM type. Other reels that might work:

It may helpful to bring at least a screwdriver and some oil/grease to the jungle in case of an reel emergency. I already experienced it myself that the vibrations of the driving boat loosened the screws that keep my Tatula together... Back home I take all used reels apart, clean and grease /oil them. Each time it surprises me hoch much dirt a single reel can collect in one week of fishing. 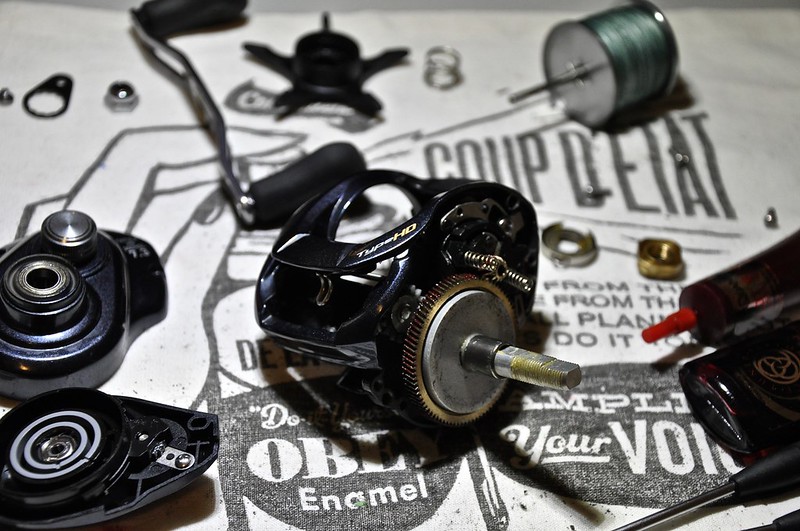 Line Looking through the web I discovered that most sites recommend braided line between 40-60lb. I go a step further and fish on all my set-ups 80lb braid except for jigs and smaller topwater lures for which 70lb is spooled. So far I haven't lost a single fish due to snapped line. I also haven't noticed that the fish would care about the thick line. My lures get knotted directly to the line only using a swivel and splitring for the connection. Till now I haven't used any leaders and probably won't start anytime soon since I already heard sad stories from people who were sure that their leader is unbreakable. Using a leader means another knot which means another weak spot for the fish to break off. On one of my trips there was a guy who lost three big ones in one single afternoon, all because of broken leader or its knot. Make sure to check your line and knots from time to time. Contact with the heavy cover weakens even the strongest line. It is also important to have enough braid on the spool because a big Peacock Bass easily takes 10-20m line from the closed break in one run. All my reels are spooled with at least 90-100m Daiwa Samurai Braid and I am more than happy with the softness and strength of this line. 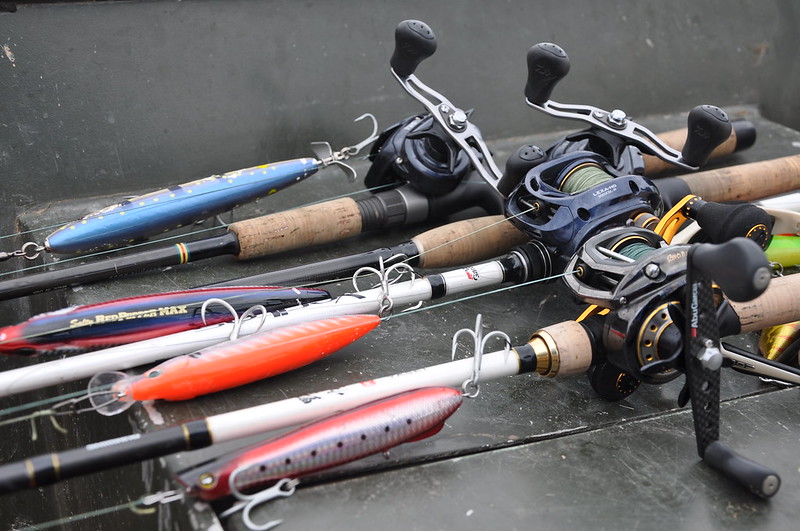 Transport One question I got asked a quite often is "how do you get all that stuff from Switzerland to South America?" Well, the transportation is an adventure for itself each time again but I can say that until now I luckily haven't had any loses, delays or damages. Despite lots of anglers who use multiple piece rods, I use mostly one piece sticks which I pack into a Flambeau Bazooka tube. Safely wraped and locked, my rods have survived all flights in the past. My reels and tackleboxes I put in my luggage between layers of clothes. I try to pack as tight as possible to prevent my tackle from sliding around during the transport. Outro While some of you, appreciated readers, can use the one or anothe rtip from this post, others might think "he's doing it all wrong" and that's ok. I think everyone has its own tackle preferences and made its own experiences which led to them. This post describes how I do it and I hope it helps in some way preparing for an adventure you will remember for life. 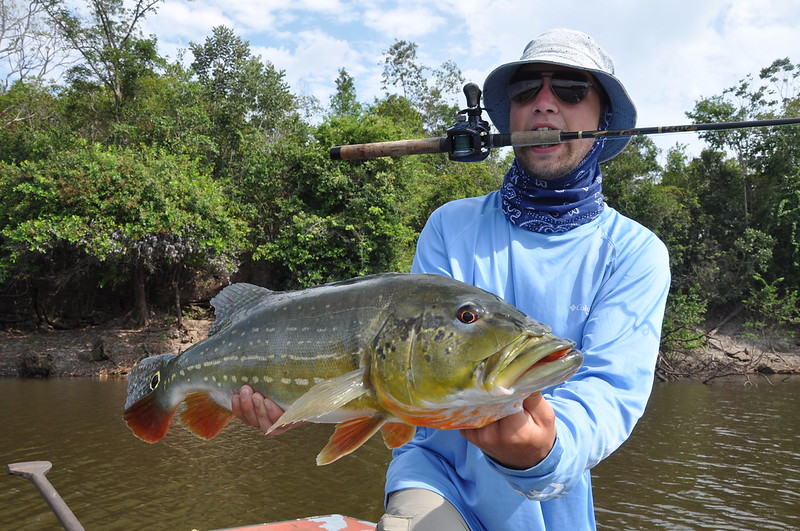 To all who are lucky enough to make such a trip I wish save travels and tons of fun. Always remember to smile! If you have any questions, feel free to contact me on my Facebook-page.